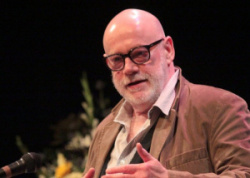 Ian Duhig has been awarded the Hawthornden Prize for Literature, worth £15,000, for his New and Selected Poems. The judges were Christopher Reid, Lucy Hughes-Hallett, Neel Mukherjee, William Waldegrave and Caroline Moore.

Duhig said he “truly elated” to hear of the award, “not least because it was the first book of mine to have won any kind of prize. It’s a real boost and now I’m pushing three score years and ten, an encouragement to keep writing. I would like to think it is also an encouragement to other writers who started late, like me, to feel they can still grow and learn and be recognised for that.”