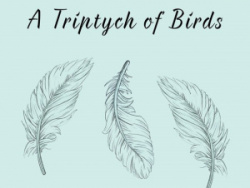 The title of this impressive debut pamphlet collection is delightful, if a little misleading. Although the first poem features long-tailed tits, and other birds, including blackbirds, sparrows, and crows flit about the pages, this collection is about much more than feathered creatures.

But let’s get ornithological, at least to begin with. The long-tailed tits in the opening poem ‘Heartease’ are described collectively as “a whimsy”; the “fantasy of a cuckoo” crops up in the next, ‘South Downs’, a poem packed with intense images such as “incense of wild thyme, garlic/ … Dryads lean in, / anoint me with / murmured prayers”; a feather from a red kite, and a heron also feature. In the sensual ‘A Celtic Spell’ a blackbird “wheedled / a cranny in my heart”, even though it chases off a sparrow and a wren.

In ‘Sparrow Love’ the poet is almost a voyeur, watching and describing the courtship and consummation of a pair, before the poem suddenly changes tone and mood, and is transformed by a poignant last moment between a dying father and his daughter. The errant father turns up again in ‘Padraig – who drove the snakes out of Ireland’, but his reappearance in the poet’s life results in her being sent to board at St Bridget’s convent, out of his reach: “I guessed he must be a saint, especially / when he himself vanished.” This childhood separation is a recurrent theme. In ‘Koala’ the description of a cuddly toy turns into memories of her father, and “of the child my mammy / snatched from his embrace.”

Even when describing an encounter of ugliness, the words are contemptuous and suitably repellent, but nevertheless evocative:

After various educational banishments – for her own good, of course - the poet escapes from

to the fleshpots of Portobello market (‘Hippy Chick Blues’). But her Irish roots are never far away. Playing house in a Camden flat, she thinks back to her parents

thankful for a roof …

Legacy in their bones,

out of crofts by blade-vowel

She flits from one address to another in London, including squats and communes – Notting Hill, Maida Vale, Highgate -, often changing partners as well: “Almost believed myself deserving of love, / till come the morning, I forgot.” (‘The Only One Who Loves You’).  In the same poem she is brought up short by loss:

the night my mother died,

love is an ether you can choke or float in.

The collection concludes with a clutch of poems about her mother:

Does it always come too soon,

summons out of sleep?

For someone who moved to England from Dublin when she was three, Pratibha Castle’s Irish background remains deep within her. This may well add a particularly lyrical quality to her poetry, and her exact, controlled, and carefully chosen words reminded me of Joyce at times. The poems are a pleasure to read. This collection marks a very promising debut.

◄ Lining up a mix of 'radical poetry, music, cabaret and mayhem'