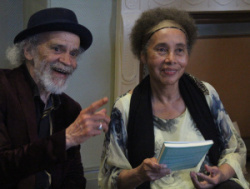 You might as well describe them as poetry royalty. Wife and husband Grace Nichols and John Agard – both recipients of the Queen’s Gold Medal for Poetry – were the two headliners at the Poetry & Jazz Café in Chichester on Thursday night, as part of the city’s festival. They are quite different poets in style, but share many of the same themes, as poets who emigrated together from Guyana to the UK in 1977. Grace Nichols’s poem ‘Tea with demerara sugar’, which she read at the Assembly Room in Chichester, was a keynote poem of her set. Demerara is one the main regions of Guyana, with a river of the same name running through it. Nichols told her audience that demerara is “a sweet crop with a bitter history [of slavery]”. She could not resist “having a little sugar [in my tea]” because it reminded her of home. But her poem adds: “I know your cost in tears, brown sugar.” 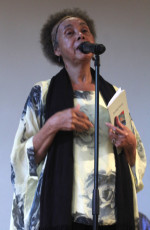 Migration was another of her themes: “Migration is very much part of our human experience … since the beginning of time.” In Guyana, people were always leaving, for the US, Britain, Canada. Nichols has a poignant poem about a grandfather waving goodbye, “his bones know for certain, never to meet again”. She also read one about the tragic two-year-old Syrian boy Alan Kurdi, who was washed up on the beach after drowning in the Mediterranean with his mother and brother, “dressed as if for an outing, a great adventure … a small and casual sacrifice, on the shores of Poseidon’s omnivorous heart”.

Of her own migration to England, she remembers “de misty greyness … when I look up to de sky, I see Lord Nelson high”. Little by little, she begins to change “my calypso ways / Never visiting nobody / Before giving them clear warning / And waiting me turn in queue." Instead of calypso, her father, a headteacher when Guyana was still a British colony, followed the English educational system, and had the whole school singing “D’ye ken John Peel?” So Grace sang it to us at Chichester.

Her husband John Agard prowls the stage, proclaiming his poems with passion, bite, and humour. He began with bite, and an amusing poem called ‘Biscuit Speaks’, examining the multinational linguistic roots of the word. He went on to deliver a long poem about flags, and their significance, for good and ill. I preferred to be inspired by his positive words about independence, rather than be fearful of the nationalistic threats they can pose: “The long shackled about to step into their own stride.”

John Agard also spoke of calypso, and how he loved its “inventive, satirical approach”. But he also reminded us of the darker side of music, with a eulogy for Victor Jara, a Chilean poet, singer-songwriter and political activist, tortured and murdered by the Pinochet regime in the 1970s.

The other part of the Chichester event was to launch this year’s edition of the annual Poetry & All That Jazz magazine, edited by Barry Smith, pictured, and Joan Secombe. It was the magazine’s first live launch in three years. Barry was the compere and organiser of Thursday’s event, and also masterminds many other events under the banner of the South Downs Poetry Festival across Sussex. Poets in the magazine who read at the event included Wendy Klein (‘Crossing the Street in Ho Chi Minh City’ – “the surprise is benevolence”); Melanie Penycate’s ‘March 2022’, about Ukraine; and Denise Bennett’s touchingly personal poem ‘The Dance’.

So that was the poetry – but what about the jazz? That was provided with great style and charm by guitarist Dominic Ashworth and clarinet player Julian Stringle, giving us their own cool takes on a series of standards and less well-known numbers. The two were a perfect blend, as a duo and in the added enjoyment and value that they gave to the evening.