The poetry of things, and of people, too: reunion of the Troubadour crowd at festival book launch 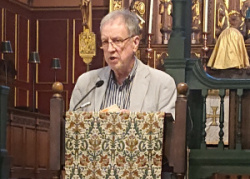 A live gathering of old poetry friends took place for the first time in well over two years on Monday night, when regulars of Coffee-House Poetry at the Troubadour met once more, this time at a church in Chiswick in west London as part of a local festival, and in an area where WB Yeats spent important parts of his early life. The occasion was a Bedford Park Festival event, in which Coffee-House Poetry’s co-organiser, Cahal Dallat, pictured, launched his latest collection Beautiful Lofty Things, and audience members were invited to contribute a poem of their own on the theme of “the poetry of things”.

Those nights at the Troubadour, packed and crowded with well over 100 people in the venue’s famous cellar, seem a fond but distant memory now. Cahal’s partner and fellow organiser, Anne-Marie Fyfe, said that Coffee-House Poetry had continued to run their poetry workshops online during the pandemic, and were looking forward to starting up in-person workshops again. But the Troubadour? “The old Troubadour that we knew is no longer,” she said. “The cellar is half the size it was. But we have other plans.”

Also coming up soon is an event to mark the fruition of a £200,000 campaign to erect an artwork to commemorate Yeats, spearheaded by Cahal Dallat. The artwork will be unveiled in front of St Michael and All Angels church, where last night’s event was held, in early September. 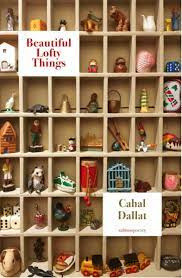 In the foreword to his new collection, Cahal Dallat looks back to his “childhood museum, comprising one mediaeval-looking pair of handcuffs, amethyst from Achill Island, sea-urchin fossils, a stopped fob-watch, granite from Dublin’s exploded Nelson’s Column, tephrite Vesuvius rock, a USSR cuckoo clock, and hair from Arkle’s tail (the last, I know acknowledge, probably the whim of a droll uncle”.  He goes on to say: “I live uncluttered now, apart from books and, all over the house, musical instruments. But I’ve gradually come to see how many poems spring from, or touch on, sundry objects, whether in loft or cellar, on shelves, in a desk drawer (gallery cards, tickets, photos), even favourite paperbacks stacked sideways on an otherwise orderly bookshelf.”

His new collection also includes in its opening pages the words of William Carlos Williams, he of the red wheelbarrow: "No ideas but in things."

The collection includes photos of objects alongside the poems that they triggered. For instance, a postcard of a castle in Germany from a school trip prompted the poem ‘Schloss Stolzenfels’:

He’d wondered ever since what it was about,

the night he’d walked along at seventeen

round trip, on the edge of reasons, the very edge

It was really about only clicked, decades later.

Simply the first time ever no one in the world

had even the remotest idea where he might be.

Cahal introduced his poems with dry humour; they often end with a line that draws a smile. They are packed with references, but Cahal wears his erudition lightly, and the poems reflect instead his fascination with curiosities: ‘Mycro’, for instance, is about a tiny camera, the kind that might have been used by a Russian spy. ‘You Must Remember This’, a poem about a visit to Casablanca, illustrated with a tile and a small vase, begins with “tourist-town chaos”, including dodgy taxi drivers and the “predictable souk, / haggle, persistence and push / a pestilence of flies.” However, it ends in a touchingly romantic way.

The collection is both exotic and esoteric, and also finds room for a poem about Johnny Kidd and the Pirates.

Often moving poetic contributions from the floor, from around two dozen poets, revealed that the poetry of things is also very much the poetry of people, in that reflections on objects can trigger memories of lost loved ones, the seeking-out of long departed relatives, as well as simply recapturing moments in time. We had poems about flags; a rag doll; a Greek island; cutlery, as well as a cruet set; collecting Brooke Bond tea cards (“we must have drunk a lot of tea”); a notebook containing the last words of a dying mother suffering from Alzheimer’s; the smell of mint; a magnifying glass, used to inspect cuts and splinters; a treasured blue shirt; a Red Star badge; a wheelbarrow, a leaf; a bookcase, and colanders; a surprising number of them. 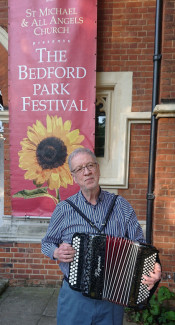 The evening was concluded by Fr Kevin Morris, vicar at the beautiful St Michael’s. He read a poem by Les Murray, ‘An Absolutely Ordinary Rainbow’. He introduced it by saying that he was a fan of the TV programme The Repair Shop, where treasured objects are restored, and many tears are often shed during and at the end of the projects.

The multi-talented Cahal Dallat used to play keyboards at the Troubadour as the audience settled itself, before the poetry started. Last night he was nonchalantly playing his accordion outside the church as we arrived. Before the event I found myself talking to a woman who asked me if I was a poet, and then revealed herself to be the sister-in-law of Seamus Heaney (the writer and broadcaster Polly Devlin, who now is also a member of Cahal’s Yeats artwork committee).

And what had I learned by the end of the evening? That the poetry of things is also very much the poetry of people and place. And that it was very good to see so many poetry people again.

◄ Poetry and all that jazz: Grace Nichols and John Agard in Chichester