The Columbus Memoirs and Other Tales: Nick Toczek and Signia Alpha, Mutiny 2000 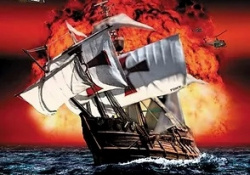 This 120-page book contains the 19 lyrics/poems of the three albums released by the poet Nick Toczek with the band Signia Alpha led by Matt Webster. The first half is concerned with the words and is written by Nick and is mainly drawn from his back catalogue. The second half of the book is filled with track-by-track recording details and the back story to this entire collaboration and is well worth reading. The CD is funky, jazzy, with a laid-back feel with vocals by Nick accompanied by the usual suspects, drums, bass, guitar with added sax, flute and purrs. The poems/lyrics add to the music and vice versa.

Bradford-based Nick Toczek has been active from the 1970s as a full-time professional writer, performance poet, lecturer, music journalist, writer-in-schools and much else. He’s written over 50 books: some for children (Me & My Poems, Cats’n’Bats’n’Slugs’n’Bugs), some for adults (Corona Diary, Death & Other Destinations), and others that are political (Haters, Baiters and Would-Be Dictators). So it’s no surprise that his poems are rhythmic, embrace rhyme and are concerned with social issues. For example, how we should treat “the other”, with respect and

For those on the run

From the prison, the gun;

For those who escape

After torture and rape;

For those who are homeless and hopeless and stateless;

For those grown so thin, they could almost be weightless;

He writes every day, it’s his job, the way plumbers do plumbing. And he has a useful piece of advice to offer: “If I’m no wiser for having written it, then why inflict it on anyone else?” I especially like the notes to the poems. They’re insightful, funny and give you information how, where and why the poem was written. He wrote ‘Coming to Get Your Next’ back in the 1990s to protest about a manipulative government, but it’s even more relevant now:

They'll sell you loads of lies and tat

And play the verbal Acrobat

And shower you in golden chat.

My favourite poem, ‘The Voices in his Head’, tries to understand the deeply disturbing worlds of two close friends who had been sectioned. It’s a bit of an earworm maybe because it uses mono rhyme so effectively. You can listen to it here. Here’s the opening:

My friend who trod where angels tread

Spoke of the voices in his head.

Inventions, fictions and the dead

All talked to him at night in bed.

Nick Toczek and Signia Alpha, The Columbus Memoirs and Other Tales, Mutiny 2000, £10

You can buy the book/CD/fridge magnet or £10 (post free in UK, but plus five quid for overseas shipping) by emailing nick.toczek@gmail.com