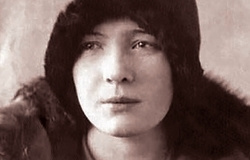 Olga Berggolts was a Soviet poet, playwright and journalist, who broadcast daily on Leningrad radio during the three-year Nazi blockade of the city. One and a half million people starved to death during the siege, including Berggolts’ husband. In 1938 she was detained for 171 days, accused of taking part in a Trotskyist conspiracy. She died in 1975, having lost two husbands and three children, including a stillborn daughter she gave birth to in prison.

The Leningrad memorial to those who died during the blockade quotes her words: “No one is forgotten, nothing is forgotten.” Yet this volume of her poetry, The Blockade Swallow, translated by Veniamin Gushchin, is being published by Smokestack at a time when a son of Leningrad, Vladimir Putin, is inflicting similar suffering on the people of Ukraine. How the wheel of history turns.

One Berggolts poem, ‘Conversation with a Neighbour’, was written in December 1941, the fourth month of the Leningrad blockade. Besieged Ukrainians might find it eerily familiar:

The sky is thrashing in the night,

the ground collapsing up ahead,

my hand can barely feel the weight

of our rationed bit of bread.

To hear the daily whistling of death

and to survive the circling blockade

we need to muster all our courage

all our love and all our hate.

Here lie the citizens of Leningrad.

Beside them Red Army soldiers.

With all their being

They defended you, Leningrad,

cradle of the revolution.

(‘Here lie the citizens of Leningrad’)

Many of these poems are written in the heat and dust of siege, and their tone is understandably heroic and defiant. Yet it remains a disappointment that they contain so few details of the actual 1940s ordeal suffered in Leningrad. In today’s era of total news, more poignant observations can be found in the despatches and broadcasts of news correspondents.

Some might say the trauma of those times offers a geo-political explanation or even excuse for Putin’s murderous behaviour in 2022. But there is no excuse. A minor yet important consequence of Russian’s invasion of Ukraine is that it could be seen to diminish the suffering of its own citizens in the second world war. The timing of this publication of translated poems is maybe unfortunate. It is certainly darkly ironic.