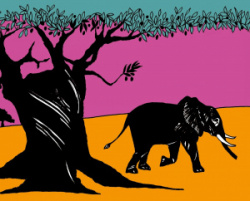 The subjects and areas covered in David Cooke’s latest collection are many and varied as he invites us to go on a quest with him through history. Several poems are set in Mediterranean countries, especially Malta, Italy and Sicily while others are located nearer to home.

By and large, the poems in the first section explore home territory. There are poems here about gardening, tree rings, birdsong, stamp collecting and children’s books. Of particular interest in the gardening section is the way in which Cooke conveys the struggle to keep nature at bay, to cut back on all the work that is needed in order to keep everything looking trim. Nature is not like that though. It is unruly and, if not tamed, will “choke and tangle” and grow wild. The “flouncing lavateras and soaring / spears of the butterfly bush” will need to be snipped and pruned if they are to be kept at their best. Even the grass, just by growing, gets “up to its tricks again”. Trying to impose some sense of order in the garden is tantamount to trying to impose some kind of order on life.

Something of the size and strength of nature can be glimpsed in ‘Bigger Trees near Warter’, a poem that bears the title of the large landscape painting by David Hockney which depicts a coppice near Warter, Pocklington, in the East Riding of Yorkshire. The painting foretells the beginning of spring when the trees are starting to come into leaf. It is dominated by a large sycamore which features in 30 of the 50 panels. Much of the painting’s upper half is given over to the intricate pattern of overlapping branches which are delineated against a pale, wintry-looking sky. In his opening stanza, Cooke notes that:

Through tangled centuries of ownership

and rights these trees have always survived.

Each one in its turn reduced to a stump,

they came back stronger, earning their keep.

A sense of history shows itself in another tree poem, ‘Reading the Rings’, where Cooke reaches all the way back to the planting ceremony itself:

imagining at its centre

to a spatter of applause.

In ‘The Robin’, Cooke’s “eyeball to eyeball” contact just inches apart from the bird provides us with a neat sense of continuity when he conjures up the line “I’m Montale and he’s like the hoopoe”, a direct reference to his previous collection Staring at a Hoopoe (Dempsey & Windle, 2020).

The poems in the second section are set in Gibraltar, Malta and Sicily. These are not just evocations of landscape – they come with history attached. In ‘Gibraltar’ we read about the great siege tunnels inside the northern end of the Rock that were dug out from solid limestone by the British during the Great Siege of Gibraltar; ‘The Victoria Lines’ concerns the line of fortifications known as the North West Front that divides the island of Malta; and in the title poem ‘Sicilian Elephants’ Cooke writes about the tiny elephants once found on Sicily, that are believed to be some of the smallest elephants that ever existed, even though they were descended from one of the biggest land mammals that have ever lived: the straight-tusked elephant.

People, rather than places, are the main focus of attention in the third section. There is a triptych devoted to the Catalan architect Antonio Gaudí, a poem about the Hungarian- American escape artist Erik Weisz, aka.Harry Houdini, and the powerful female labour organiser, Rose Zehner who led a strike at the Javel-Citroën Factory in 1938 and later became a Resistance fighter. In ‘Franz Marc: Der Turm der blauen Pferde’ Cooke finds inspiration in art to develop an ekphrastic response to the German Expressionist’s 1913 oil painting The Tower of Blue Horses. It has been hailed as one of the artist’s best works but went missing in 1945:

With so much implied in gleaming haunches

– their strength and movement, the sprung weight

of muscle – your eye forgets that flatness:

the image of an image abstracted

from a canvas lost and maybe destroyed.

Two poems caught my attention in the final section: ‘The Mechanical Turk’ which pays homage to the world of wind-up toys and ‘Ruins’ with its italicised quotation from the Old English elegy ‘The Ruin’. Echoing its Old English counterpart, Cooke laments the inevitable transience of all things.

Literary references and historical figures set against a background of travel and personal quest link these wide-ranging poems together. Taken as a whole, they make for a very satisfying read.

◄ A poem for Ukraine on International Women's Day

One poet broadcasts from Kyiv, another makes her way from Ukraine to Scotland to appear at poetry festival ►