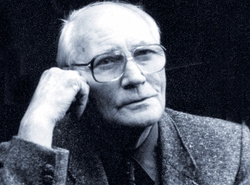 Vernon Scannell was at one time a professional boxer. He also twice deserted from the army during the second world war, and was twice court-martialled as a result. Yet these later collected poems show him to be no faintheart. He continued to give poetry readings into his early 80s – he died in 2007 -  and his poetry is suffused with clarity and calmness at the prospect of approaching death.

Scannell published his Collected Poems in 1993, but continued to write for another 14 years. His last six books are collected in this volume, and published to mark the centenary of his birth.

In ‘Missing Things’, he regrets the things he’ll leave behind “like this calm evening sun / which seems to smile at how the blackbird sings.” In ‘Old’ he says:

Whatever others say, I’ll never

I’d sooner use the simple names.

and have it all quite plainly said.

Meanwhile he is content to hang on a little longer, “grateful for God’s providence, / for Schubert and chilled Guinness.” (‘Small Mercies’), planning his own funeral, or perhaps perusing The Oxford Book of Death (Indian Summer’).

Scannell was a poet of rhyme and form. ‘In Disguise’ he laments that it has gone out of fashion:

Those boys and girls,

who, these days, top the bills

at all the most important Festivals,

talk about their ‘line-breaks’ and such things,

any pair of vocables

they will designate as ‘rhymes’.

Not for any moment

would any of them undertake

even if they had the know-how and the skills.

Yet sometimes a final rhyming couplet jars – at least, it did with me - as in a poem about the Dunblane school killer Thomas Hamilton:

no one could guess, when he entered the school

where, shortly before, they had sung

their sweet, simple hymns, his revered Smith and Wesson

would be used by its owner to teach them a lesson.

But generally his poetry hits the right notes, and in the right order, whether accepting the indignities of old age with stoical good humour, as in ‘A La Recherche des Mots Perdus’, or claiming that God spoke to him one night on Ealing Broadway: “And yes, / I must confess / I might have been at least a little pissed.”

This comprehensive collection of late poems reveals a poet who may well have found himself out of fashion, and out of time. Yet he was still committed to his craft, fascinated by and determined to mine the poetic possibilities of old age.

I echo John's sentiments. You have a lightness of touch, Greg, that nevertheless leaves quite an impression.

What a great review for a great poet.