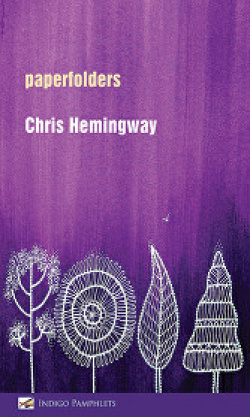 Poet and songwriter Chris Hemingway was born in Mansfield, studied in Leeds and Manchester, and now lives and works in Gloucestershire. His debut pamphlet Party in the Diaryhouse (Picaroon Poetry) was published in 2018. In recent years he has worked as a volunteer for the Cheltenham Poetry Festival and the Gloucestershire Writers’ Network and is well established within the Gloucestershire poetry scene.

Despite its title, paperfolders is not a pamphlet about letter folding machines, foolscap document wallets or the art of origami.  Instead, it is, according to the description on the back, “a collection of stories about community, connectivity and creativity – poems written in response to the rise in populism, the pandemic, and the increasing scope for isolation and abuse within society.”

If I think about novels by Harriet Beecher Stowe and Lynne Reid Banks, the Manic Street Preachers, Beauty and the Beast or Betjeman’s pronouncement on Slough, it is because Hemingway’s poems draw us fleetingly towards these things.

Hemingway’s day job in finance and statistics means that, from a poetical viewpoint, he has a statistician’s eye for detail. It comes as no surprise that coins, silver, bronze and the gold standard inform his poems. In ‘Currency’:

Cash is a cipher for anxiety

and algorithms are calculated illusions.

we would settle for less.

In an interview with the Wombwell Rainbow in March 2019, Hemingway states that, as a writer, he likes to articulate something concisely and hopefully in an original way. In ‘Satellite Towns’ and ‘Skype Family Robinson’ he records with precision the trends of our time. It is a strange mix of the old and familiar coupled with the brutal anonymity of some modern technology.

There are several ekphrastic poems in this collection. ‘Gallery’ from the painting Ennui by Walter Sickert describes graphically the painter’s interpretation of the boredom of married life. ‘In Our Province’ after the painting Fuchun River by Song Wenzhi, describes the density of the forest, an effect achieved by the piling on of black ink, and then speaks of the ink as being  a precious commodity:

We pipe it to the town.

Fill our quills and palettes

as if we are bottling the night.

Everything else in the painting is, by comparison, almost transparent. ‘When the Traveller Knows that he’s Closer to Home’, from the woodblock Fujikawa by Utagawa Hiroshige, captures with perfect precision the snow-filled trees, the symmetry of the white-covered rooftops and the horses and people who are returning home.

Hemingway’s poem ‘Resting a Calligraphy Brush’, inspired by a calligraphy brush rest on display in the Ashmolean Museum, explores “the pause between words / at a station of ideas”:

The brush is rested.

To let him draw

(at the very least) inspiration.

In another poem, ‘When the Poet’ explores the problem of writer’s block, the unfinished line of the title testifies to the subject matter. Anything or nothing might follow on. The advice, when it comes, is to

Tell them to write what they know.

And if in the moment they know

only sparse skies and silence,

then tell them to write about that.

The stand-out for me was the prose poem ‘Letter to Shareholders 1st April, 2051’ –an April fool if ever there was one. It announces with comic absurdity a decree from on high that poetry will replace the jargon of ‘business speak’ as the required mode of communication:

Our business model needs to change, but there are positives. Security costs will be lower, as tabloid journalists will find messages more difficult to interpret. We are also able to abandon our plain English policy, as surrealism and metaphor are now acceptable business practice.

In this collection, Hemingway makes the everyday seem both strange and familiar. He chronicles our topsy-turvy world with insight and precision and, in the process, always has something to say that is worth hearing.

◄ Image of poet Maya Angelou to appear on US quarters