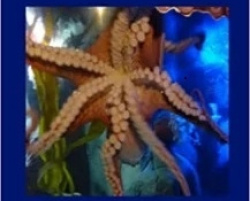 Mark Totterdell was born and brought up in rural Somerset and now lives in Exeter where he works as a copywriter. His first collection, This Patter of Traces was published by Oversteps Books in 2014. A further collection, Mapping was published by Indigo Dreams in 2018. His poems have appeared widely in magazines and anthologies and he has achieved success in many competitions. Mollusc is his third collection.

Molluscs (marine animals with soft bodies) are only a part of this collection which also includes poems about birds, insects and other animals. To give an indication of the scope of this book, the subjects range from butterflies and moths to pond skaters and scarab beetles; from snakes and whales to stars and galaxies. A cursory glance at the contents page sent me straight to the dictionary to familiarise myself with poem titles such as ‘Geotrupes’, ‘Cepaea’, ‘Mytilus’, and ‘Cameroceras’. But don’t let this put you off. The titles might be for the specialists but the poems that follow provide plenty of riches for the generalist.

In his book Entangled Life, Merlin Sheldrake makes the point that difficulties can arise if you repurpose a human concept to help make sense of the life of a non-human organism. You will either fall into the trap of anthropomorphism (the attribution of human characteristics or behaviour to an animal or object) or you will objectify the organism by referring to the genus as ‘it’. Totterdell’s approach, which relies in part on both of these devices, succeeds in taking his readers nearer to his subjects in various ingenious ways which widen the scope of our imagination, and allow us to think beyond conventional norms. For example, in ‘Chorthippus’ (a large genus of grasshoppers) it is all about sound, in ‘Escapologist’ it is purely visual, in ‘Badger’ it is by a process of deduction, and in ‘Frog’, it is all about appearance.

At one end of the spectrum Totterdell makes use of imaginative vocabulary in ‘Jersey Tiger Moth’ to describe its form and colour:

[a] soft arrowhead in simple origami,

printed with patterns not quite black and white,

It flies, and its flashed underskirts are gaudy,

and at the other he launches into the wacky language of ‘Helix’ to describe a large, air-breathing land snail:

backsacked pedlar down a shadowed back road,

For some reason, another poem in the section on molluscs, ‘Janthina’ with its refrain “Janthina janthina” that is “seizing the hearts of / the by-the-wind-sailors”, reminded me of Bob Dylan singing Corinna Corrina. Whether Totterdell had this in mind or not, we may never know.

Everything in this collection hones in on the lives of insects and molluscs, “the small complex wonders of their bodies”, and then pans out to incorporate the vastness of the stars and galaxies.  ‘Ming’, a poem that celebrates the oldest clam ever found, gives us a sense of the immensity of time:

it’s been, all the scientists now agree,

alive since the fifteenth century.

Totterdell can conjure poems out of the most unlikely places; ‘Old Sludge Beds’is set in the lagoons of a former sewage settlement. He can write a poem about the gelatinous substance of frog spawn and make it interesting because of his powers of description and evident enthusiasm for his subject. Furthermore, he often makes use of these opportunities to remind us of the fragility of the world we live in and the sheer scale and overpowering might of creation.

These poems are full of wonder. Several of them incorporate rhyme and make use of formal stanzaic structures such as couplets and tercets. They carry with them a sense of awe and respect with their meticulous descriptions of the natural world and the skies that lie above us. Reading this collection we become aware more than ever before of the diversity and richness of life on our planet, even in its smallest forms. Highly recommended.

Thinking outside the Unboxed: 'connectivity and the universe' competition ►

Thanks for this review, Neil ... and thanks for all the reviews you do for Write Out Loud! I also really enjoyed this collection, before passing it on to you for review.