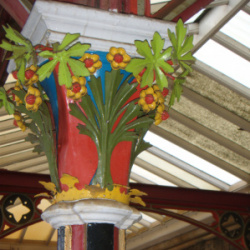 Ledbury poetry festival and West Midlands Railway are celebrating the poetic heritage of a railway line, from Worcester Shrub Hill to Ledbury, and its association with the Dymock poets, including Robert Frost and Edward Thomas.

The Poetry on Platforms website says: “From the group of young poets and their families who visited each other in a little village called Dymock in the months before the first world war (whom we now think of as the Dymock poets), to the poets who have travelled along this line every summer since 1997 to share their work at Ledbury poetry festival, we are exploring how poetry connects us: from place to place, past to present, and person to person.”

Each station - Worcester Shrub Hill, Worcester Foregate Street, Malvern Link, Great Malvern, Colwall, and Ledbury - has its own story. At Great Malvern, for instance, the website says: “Look up. At the tops of the pillars supporting the cast iron girders of this station, there are intricate designs of flowers and foliage, their colours brightening the grey and red uniform of the railway station.

“These are the same buds and leaves that looked down on a woman on this platform over a hundred years ago. Imagine: their colours are deadened by the darkness of night, as she tries to herd tired children and wayward luggage across the deserted platform. The woman is Helen Thomas, wife of poet Edward Thomas and it is the 4th of August 1914, at the eve of the Great War.

‘Station after station she saw platforms crowded with serving soldiers and reservists summoned to their regiments; also holiday-makers hurrying home. So she with her party and copious luggage was heading against the grain of world catastrophe into a locality of idyll: of woodlands, fruit, flowers, streams, ancient farms and churches, in a glorious hot summer, to be among poets.

The train, scheduled to run to Ledbury, halted at Oxford and everyone disembarked. The stationmaster, not certain there would be another train, advised Mrs Thomas to find rooms in Oxford for the night. But a porter assured her there were none left. Nor could she have afforded it. She sent Edward a telegram, and waited. A train came and, stopping at every station, got them to Malvern by midnight. There the stationmaster was certain: no onward train that night.

‘I shall never forget that journey’, Helen later wrote. But despite the stress of her arrival, she had happy memories of the following few weeks spent at Dymock, with the Abercrombies, the Gibsons, the Frosts and visiting friends: ‘We spent those happy weeks in the open air, in the evenings sitting with our friends and talking – talking of people and life and poetry’.

Travellers can find QR codes to scan at each of the stations, which link to web pages with more information about the line and those who have used it. Contemporary poets who have taken part in the project include Naomi Shihab Nye, Alison Brackenbury, David Constantine, John Hegley, Yang Lian, Fiona Sampson, and Bejan Matur.

◄ Rebels who won applause: Lemn Sissay on the dissidents of poetry

'The coast affirms that lines are always changing' ►