Learning to love the sonnet and other skills: Poetry School’s MA students celebrate with rite of passage night 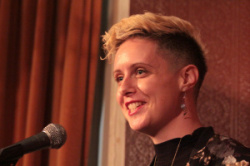 Sue Johns began writing and performing some years ago as a ‘punk poet’ and is veteran of the London circuit. She has published a number of poetry collections, and yet still feels she has something to learn. After completing the Poetry School’s two-year, part-time course in writing poetry, she described it on Wednesday night as one of the best things she’d ever done.

She was introduced at the Betsey Trotwood pub in London by fellow MA poet Kat Dixon, pictured. Sue thanked her by saying: “She just managed to make ‘been round the block’ sound rather lovely.” She confessed that “during this course I’ve developed a very intimate relationship with the sonnet”, finished off with a specular (mirror) poem, and another following a visit to Canterbury cathedral that was laced with quotes from Henry II.

There were very little nerves on display from any of the poets at the packed Betsey for a night titled Zoomed Out, a nod to the fact that much of the course had by necessity to be conducted online during these strange times.

Sometimes it was a question of spotting future stars. Kat Dixon has an assured delivery and confident manner, as she revealed that “one of the things we learned about was writing funding applications. What if all the greats had had to apply for funding?” She offered other insights. A poem called ‘Instruction’ (after Yoko Ono) was written after course tutor Tamar Yoseloff “put me on to her”, while a poem about living through the pandemic included these lines: “Listen to weeks slip by / rub alcoholic gel into your thighs … try not to want.”

John White had a poem published by Michael Horovitz’s New Departures back in the 1970s. Then poetry took a back seat while he worked as a Bafta-award winning director and producer. He described the MA Zoom sessions as a “golden hour or two in the week during lockdown”, and thanked course tutors Tamar Yoseloff and Glyn Maxwell: “It’s difficult to be critical and supportive, and they managed to do that.” There was a poignant poem about boarding school, and another, confessional one, full of warm and funny anecdotes titled simply ‘Thank you, Kenny’. He finished with what he described as a “fun poem” about heart surgery.

None of these poets had emerged from the MA with a set, Poetry School ‘style’, whatever some people may think that is. Instead there was a rich variety of voices.

Anne Symons read a series of accomplished poems that gave voice to some of the unnamed women in the Old Testament. Women such as Lot’s wife mourning Sodom, or Noah’s wife: “He cannot bear the damp these days. His joints seize up … little room for love on board … He doesn’t talk about the deluge, those who drowned.”

Emma Simon admitted “that we do write a lot of poems on the MA. I’ve been written quite a lot about family, and food.” She added that it had been dispiriting to read about poets that got up at 4am to write; she wanted to celebrate those that preferred to lie in bed until 10. This received an resounding audience cheer.

Nisa Saiyid, a Poetry School regular for many years, had the unenviable opening slot but coped comfortably, reading a number of poems about art and artists, including Francis Bacon. Sara Levy, whose MA portfolio will shortly be published in a pamphlet, rounded off a warm and supportive night with whimsical, upbeat and amusing poetry that included such lines as “When is the right time to tear a toaster from the wall?” When, indeed?

Tutor Tamar Yoseloff described the evening as “a celebration of seven poets who have survived the course. This feels like a rite of passage, even if some of them have read poetry before.” Fellow tutor Glyn Maxwell added that all of the poets during the course had “improved so rapidly, and so strikingly”.