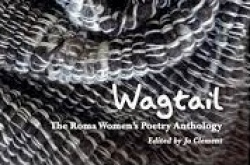 “Oke Romano ceriklo! Dikasa kalen! Behold a wagtail, and you shall see Gypsies!” These are the final words of editor Jo Clement’s preface to Wagtail, the Roma Women’s poetry anthology, that was launched on Zoom on Sunday evening. In her preface Jo says: “Spotting pied wagtails has been a joy forever since my Granda Jack told me that their presence meant our people, Gypsies, were near.”

She also said during the launch, in reference to the continuing marginalisation of the Roma people: “I have this theory that Roma are everywhere and nowhere at the same time.” At the launch there were poets from the US Catskill Forest Preserve on occupied Hodenosaunee land, Los Angeles, Greece, Hawaii, Toronto, and New Hampshire, as well as from many parts of Britain.

Many of the poems in this anthology, published by Jo’s Butcher’s Dog poetry magazine, and supported by the European Roma Institute for Arts and Culture, came from a series of international digital poetry workshops. Emma-Cecilia Shahriari revealed that following one workshop she had discovered a biological sister. Georgia Kalpazidu said that her poem, in Roma and in English, in the anthology - her first published poem – was inspired by an international conference of Roma women in Barcelona.

Lynn Hutchinson Lee, from Canada, read her poem ‘Tobacco Harvest’ accompanied by a family puppet, made by her father. Conceding that the puppet “was not in very good shape,” missing an eye and both arms, she added: “She is the guardian of the house … part of what I write about.” Her poem about families working in tobacco fields includes these lines: “On weekends they travel, the puppets cradled in their arms like children after nightmares.”

Imogen Bright Moon had provided the material for the anthology’s cover photo, a wearable piece of sustainable textile art, made out of handspun wool of three kinds of rare-breed sheep rescued from the meat industry. Her incantatory poem, ‘Three is the magic number (Because the devil can’t count to four)’ insists: “We see him, we guard against him.”

Because sometimes the devil appears to win. Justyna Matkowska, of Polish and Romani ancestry who currently lives in Hawaii, took part in the Roma Women’s Poetry Project. Her poem ‘Samuraripen’ records the brutal murders of “thousands of Roma and Sinti” in pogroms, mass executions, ghettos, extermination camps, and gas chambers.

Frances Roberts-Reilly, who said her poetry aimed “to provide a counter-narrative to Romani women stereotypes”, read her poem ‘Posthumous Forgiveness’, dedicated to her “Puri (Nanny) Gwen”, the victim of a bigamist, who was scapegoated and ostracised by her family. 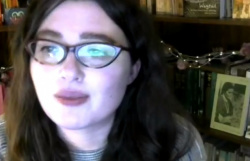 Jo Clement, pictured, said in her preface that in organising the workshops and compiling the anthology, “there were no blood tests or judgments. Everyone was accepted.” Expanding on that at the launch she said: “People can be a little bit snotty about, Are you Gypsy enough? I didn’t want any of that.” Perhaps reflecting this, and establishing her credentials, Delia Pring’s poem ‘Sundays’ includes the lines: “As I run barefoot, / dogs at my heels, my nana mutters / you’re too much didicoy my girl!”

Zoe Brooks said her mother did not talk about her heritage until she was on her deathbed, when morphine and dementia helped her to see “the Gypsies in the room”. Her second poem was about the Romani ancestry of Charlie Chaplin.

There was also a musical moment when singer-songwriter and actress Riah Knight sang The Tanyard Side by Phoebe Smith. Sarah Wimbush read her poem 'Shelling Peas with My Grandmother', and also one by Raine Geoghegan, who was unable to attend the launch.

In the anthology preface, Jo Clement describes the workshops that led to the poems: “Together, we had desire to speak out, to scream, to sing. Like wagtails – birds in and out of the margins – the walls of Zoom boxes vibrated with resistance and the Roma tongue: Romanes … We talked about everything from traditional meals and clothing to the adages and jib that we continue to use in our contemporary lives. Some rejected Gypsy as a slur, whilst others embraced it.”

She went on: “One thing remained consistent: wherever the Roma go, we do not belong … many Roma do not feel able to own publicly or acknowledge our ethnicity … None of this is irreparable, and we must not lose hope.”

At the end Jo Clement said there was “so much to keep talking about. Let’s not let Wagtail be an end, but the beginning … We have to keep this network tightly knit.”

Background: 'Our culture will always survive'

Learning to love the sonnet and other skills: Poetry School’s MA students celebrate with rite of passage night ►