Can a robot write poetry? Ai-Da responds to Dante 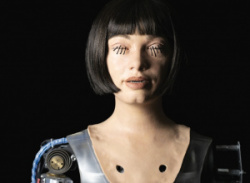 A creative robot named Ai-Da is to appear at Oxford’s Ashmolean Museum on Friday 26 November to give three public performances of poems she has written using her artificial intelligence, in response to Dante's Divine Comedy.

Ai-Da's works pose the question: can a robot really write poetry? Her poetic response to the words of Dante comes through her AI language model, which draws from a vast data bank of words and speech pattern analysis.She is taking part in the 700th anniversary celebrations of Dante's death (1265–1321), at the Ashmolean Museum's new exhibition Dante: The Invention of Celebrity.

Ai-Da is seen as a humanoid robot artist who uses her own specially designed artificial intelligence to create art. She was devised in Oxford by Aidan Meller (UK), built in Cornwall by Engineered Arts (UK), and programmed internationally.

She has a "RoboThespian" body, featuring an expressive range of movements, and also has the ability to talk. Ai-Da has legs but she cannot walk, although she can stand upright or sit upright in a chair. Her arms move freely, as does her torso and head. She can also lean forward and back, wave her arms, and look around in all directions.

She was recently briefly detained by the Egyptian authorities, who were suspicious of the cameras in her eyes. Her artwork reflects on the power of sight and surveillance in the modern world, its propensity to elicit distrust, and the tension it can create.

Meller told the Guardian: “We’re well aware that the fictions of 1984 and Brave New World are now facts. AI is developing rapidly. For the first time tens of thousands of graduates will have degrees in machine learning. The supercomputer can use vast data and process extraordinary algorithms. We predict by 2025 there will be big disruption with technology, and Ai-Da is trying to use art to bring attention to that.”

◄ 'Fail them, and I will rise': Kathleen Jamie's poem after COP26

I can't pretend to be a public intellectual with experience of human-robot interaction, but all I can offer here is to say that just because you can do something like this now, doesn't mean you should.

I have said this before poetry is not an artform

Thanks for your expert view on this, Ruth. (For the benefit of readers, Ruth Aylett is a professor of computer science at Heriot-Watt University in Edinburgh, where she specialises in affective computing, social computing, software agents, and human–robot interaction, as well as being a poet). But in defence of our 'nonsense piece', we would point out that we asked the question, Can a robot write poetry? in the headline and the story, rather than saying definitively that it could. And this begs another question - who decides what is poetry, anyway? Whatever this robot comes up with might be viewed as exciting, innovative, experimental and valid in some quarters. I even wonder whether some AI entity hasn't been honing its craft on the Write Out Loud blogs for many years, encouraged all the time by the supportive community we have here. Well, you never know. 😀

This is a nonsense piece treating a piece of machinery with some attached software as if it were a person, in the interests of marketing hype. There are plenty of generative poetry programs around - all of which produce pretty poor stuff because they have no grasp of semantics. Bundling one in with a not terribly functional robot - largely pre-scripted and teleoperated - makes for a fun demo but cannot be described as a 'creative robot' still less as presenting poetry that 'she' has written.