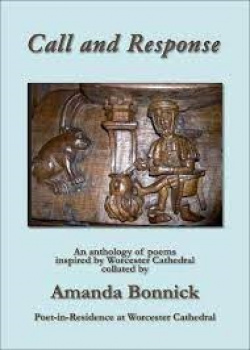 This attractive pamphlet of 23 poems by 17 poets has been collated by Amanda Bonnick, Worcester Cathedral’s first poet-in-residence, following a call for submissions from local poets to send in poems inspired by the cathedral and its presence in the city. The title of the anthology carries with it an echo of the short petitions that are said or sung as versicles and responses by clergy and congregation in settings of Christian liturgical worship.

The present cathedral church which was built between 1084 and 1504 represents every style of English architecture from Norman to Perpendicular Gothic. Among other things, it is famous for its Norman crypt, Great West Window and fine woodwork, all of which are featured in this anthology.

The anthology begins in what must be the oldest part of the cathedral, the Norman crypt. Bonnick’s poem simply titled ‘Crypt’ describes it in the following terms:

This is the sacred engine room

felt but not seen.

The breath, the word,

the pneuma, the spirit,

and all are held here.

The line that is reserved for the single word “turns” is pivotal here. Leena Batchelor, the current poet laureate for Worcester, also focuses on the crypt which she describes as “my special place” where she treads lightly, conscious of “the skeletal history beneath”.

Almost every part of the cathedral has been covered in this anthology. Nina Lewis visits the cathedral library which contains, among other treasures, the will of King John and a 1225 copy of Magna Carta. Ade Couper lingers in the cloisters and Anne Hodnette draws inspiration from the nave and transepts, altars, effigies and tombs.

In ‘Worcester Cathedral’ David Pamment, in a single poem, takes us on a rhymed tour of the cloisters, nave, bell tower, quire, chantry, high altar and crypt. In the third stanza, several allusions are made to the historical significance of the cathedral that includes two royal burials: King John (d.1216) and Prince Arthur Tudor (d.1502).

East of the Crossing, the opulent Quire

Heir to the kingdom doomed never to reign.

Below is the crypt where St Wulfstan trod

Mike Alma concentrates on the misericords. Thirty-nine of them date from 1379 and include a complete set of the Labours of the Months. Their subject matter includes biblical stories, mythology and folklore. One of the misericords is reproduced on the front cover by permission of the Chapter of the Cathedral.

In her poem ‘Enigma’ Roz Levens turns her attention to the cathedral bells, in particular, the Bourdon bell which is the deepest bell in the chime. It is the one that never swings but “hangs heavy, weighted, waiting, / for its moment to peal, to appeal, / to ring out and call its name”. The title of her poem, with its allusion to Elgar, serves to remind us that the first performance of the revised version of his Enigma Variations – the version usually performed – took place at the cathedral during the 1899 Three Choirs festival. He is commemorated in a stained glass window which contains his portrait.

Not everything is about history, tombstones and silence. In ‘The Opposite of Silence’ Siân Mitchell reminds us that people lie at the heart of every church and that they are the living stones that make up its fabric. Steve Quick’s poem ‘The Absence’ which is dated June 2020, speaks of the sadness many churchgoers have experienced from not being able to worship together in church during lockdown:

The doors are closed and barred to me

as if I were bespoke with buboes and scars

and my bell uselessly warning of my approach

But I am marked

and I cannot enter.

I like the way he has associated the present ‘plague’ of Covid-19 with the plagues of the past.

In ‘The Pink Giraffe in the Great West Window of Worcester Cathedral’ Polly Stretton focuses on the stained glass which tells the story of creation from Genesis and shows many different animals. Its joviality provides some light relief after some of the more serious poems:

the value of making a big mistake.

While most poems concentrate on the interior of the cathedral, some focus on the exterior and its environs: the Edgar Tower, College Green, the River Severn, traffic on the by-pass and the cricket ground at New Road giving us a sense of the cathedral’s setting and presence in the city.

The scope of this collection ranges widely. In the words of Canon Georgina Byrne, these poems “capture the essence of the place; they reveal just how much the cathedral has the capacity to inspire and move people”.

A collection of Amanda Bonnick’s own poetry and prose based on her residency, Solace in the Silence, is to be launched in the cathedral on Tuesday, 9 November.

◄ Poets for the Planet at UN climate change conference in Glasgow

New plea to help save William Blake's cottage in Sussex ►