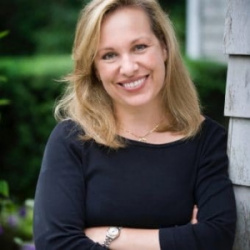 A poet who does much of her writing in collaboration with her mother, the actress Julie Andrews, has won the 2021 Bridport prize for poetry. Emma Walton Hamilton took the £5,000 prize with her poem ‘Over the Tannoy’, which judge Raymond Antrobus described as “a very ambitious, collaborative, multi-formed poem … ironic, satirical, conversational, archival, historical”.

In a film released by the Bridport Prize, Emma Walton Hamilton explained that the poem was based on a letter, “a conversation across time with my great-grandfather, who was a coal miner in the early 20th century in South Yorkshire, and was also a poet”.

She explained that she has collaborated with her movie-star mother and “writing partner” on a number of children’s books, and a memoir. But she added: “My poetry I write purely for myself, and purely for pleasure. To have submitted it anonymously … to have it judged just on the merit of the words I wrote … [has] hopefully cured me of my imposter syndrome! We’ll see.”

Emma Walton Hamilton is an author, editor, producer, and arts educator. She has written or co-written over 30 books for children and young adults, and two memoirs. She is a faculty member of Stony Brook University’s MFA in creative writing and literature, based in New York, and teaches children’s literature and playwriting.

Second was Armen Davoudian, with ‘Guidance Patrol’. His poems and translations from Persian appear in AGNI, The Sewanee Review, The Yale Review, and elsewhere. He grew up in Isfahan, Iran and lives in California, where he is a PhD candidate in English at Stanford University.

Third-placed was Erin Lambert Hartman, with ‘Bruised Fruit’. Erin Lambert Hartman is an American poet whose poetry has appeared in journals such as Blackbird, Colorado Review, DIAGRAM, and the Madison Review. She earned an MFA in creative writing from Syracuse University (2001), and has taught at Hostos Community College, Virginia Commonwealth University, and James Madison University. She is also a licensed massage therapist and owns a small healing arts practice in Harrisonburg, Virginia.