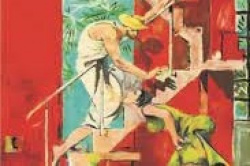 Barry Smith has a soft spot for the 1960s. ‘Beatific’, inspired by ‘The Beatles 1962’ by Sir Peter Blake, is bursting with colour, as was the later part of the decade. It is the small details that this reviewer  recognises and relishes: “I stepped off a green bus, lightly swinging on / a slippery chrome pole that marked the platform’s edge”. The days of Green Rover tickets, before EU health and safety, eh? The poem ends on a darker note: “… before the sharp crack of bullets / or the sneaking assassination of cancer / brought home the winter of regret from me to you.” There’s also a poem about the Stones, focusing on the notorious police raid at Redlands.

Smith is currently director of the South Downs poetry festival and co-ordinator of the Festival of Chichester. He curates the poetry part of Blakefest, devoted to William Blake, and edits Poetry & All That Jazz magazine. His debut collection looks at the idea of life as performance, with poems on classical and popular music, on art, theatre, poetry, and clowns in his home town of Bognor Regis.

A poem about another painting, ‘Small Harbour Scene’ by Paul Klee, that was banned by the Nazis as degenerate art is of an altogether different tone, taking in chemical warfare, Zyklon B, kindertransport and internment camps. ‘Boat Pound’ is a kind of grudging tribute to Ezra Pound as a poet that nevertheless acknowledges his detestable political allegiances.

There are a number of comfortably paced poems about walking in this collection. ‘Towards Church Norton’ is an account of a walk along a peninsula in West Sussex that encompasses steam engines and longships, as Smith whistles up the past.  ‘Bosham Harbour’, in the same line of country, muses on Cnut and Harold, and the turning of the tide. ‘Tennyson Trail’ is replete with birds, butterflies, and wildflowers along a “chalk-ridge pathway”; other tracks that Smith takes lead to ‘The Thin Places’, ‘The High Beeches’, and the mysterious ‘Longstone’.

And what of the poems that are specifically about performance, or appear so? ‘Inflatable Floors’ visits the Edinburgh Fringe: “The things we do for art …”; ‘Clown Town’ celebrates Bognor where clowns regularly congregate and parade in “shabby splendour of baggy patchwork”; ‘The Poet in the Meadow’ is about poetry performed in a lecture theatre, but also about the Iraq war.

‘The Return of Dirty Den’ casts the original EastEnders TV villain as an archetypal get-rich-quick plunderer and asset-stripper, of the kind that we have come to know so well in recent years:

Is that you, Dirty? Is that really you,

leaving behind a trial of broken hearts,

There is grim, sometimes shocking humour surrounding a group of male patients awaiting radiotherapy as part of their prostate cancer treatment (‘Off Your Trolley’); while ‘The Rose Garden’ simply celebrates varieties of roses with observant and joyous description.

This collection resonates with Smith’s love of music, from the exuberance of ‘Me and Herbie Down at the Poetry & Jazz Café’, with its references to Lou Reed and Walk on the Wild Side, to the final, rather eerie poem in the collection, ‘Unfinished’, evoking Bach, Bruckner, Schubert and Mahler:

While Bach teases with missing steps of the fugue

and Bruckner glides serenely to the graveside,

Schubert makes a habit of leaving us in the lurch,

but Mahler is a master of the incomplete,

seducing us with strains of elegaic loss and pain

The poem also refers to other incomplete cultural works, including those by Jane Austen, Charles Dickens and Scott Fitzgerald, concluding: "It is in the voice that the silence is heard." The book's title poem has death as its subject matter, how its “choreography” can be “a fine art”, although not in the inglorious end of the final stanza.

This book is beautifully produced by Waterloo Press, and full of poems that are always thought-provoking, and that force you to concentrate, using language that is satisfying, carefully chosen and meticulous. Maybe it is something to do with the light along the south coast. This is a collection to re-read, and to treasure.

◄ Drawing the line: Ray Pool looks back at last days of steam