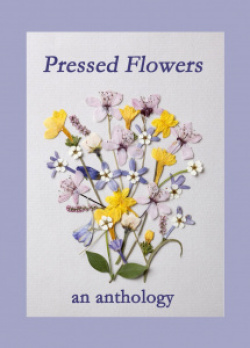 Oshibana, or the art of pressing flowers in such a way as to make a whole picture, dates back to the 16th century, according to Japan Today. When exchanges between Japan and Europe increased in the early Victorian era, the art became fashionable in both England and America. As a result, Victorian ladies made pictures out of dried pressed flowers and combined them with ribbons. It was not long before the art of placing petals or a whole flower into a book became a way of preserving a special gift or moment.

This anthology of 23 poems by 17 poets comes with its own history. It began when two poets, Polly Stretton and Charley Barnes, who was the poet laureate for Worcestershire at the time, shared their own poems about sunflowers with each other. This exchange led to an idea. They put their heads together and decided that, given the many talented poets they knew, they could stitch a whole pamphlet of floral pieces into an anthology. Poets were invited to participate in the project and, from this whirlwind process, Pressed Flowers was born.

The subject matter is as varied as the flowers themselves. Forget-me-nots, sunflowers, daisies, violets, clover, dandelions and columbine grace these pages in equal measure. Victorian flower albums, a visit to a museum of Cretan history, reflections on the passage of time, Heaven depicted as a secret garden and the prophetic vicissitudes of nature issuing warnings to mankind are all woven with “flora found in our hedgerows and woodlands … all perfectly preserved”.

The poems in this anthology are by turn descriptive, scientific and philosophical. Some exploit the symbolism of flowers to give their poems an extra layer of meaning. For example, Maggie Doyle in ‘Morning Glory’ writes about an unfulfilled love while Leena Batchelor in ‘A Victorian Flower Album’ expands on the meanings of flowers and colours to construct her poem in ingenious ways:

Pressed beneath the sheets of life, pressed hard but with care,

the petals glow in brilliant remembrance.

She lifts a parchment hand to wave away the air, turns the leaves,

recalls her girlhood in scents of rosemary buds and pink carnation dreams.

Other poets explore the memories pressed flowers hold for those who find them “ironed between the pages”. In ‘Petal Haunting’ Ruth Stacey suggests that these may be

a first date and kiss; a wedding bouquet;

In many cases they are viewed simply as a token of love. As if to balance this out, there are darker sides to the anthology as well. Sarah Leavesley’s very fine poem suggests something slightly flawed that is more to do with relationships than the state of pressed flowers. We get a sense of what is hinted at in the opening lines:

Every time I tried, something slipped.

I forgot to apply the right pressure –

petals browned before they dried.

Fast-track to the closing lines and we soon see where the poem has taken us to:

would you have turned away?

Or simply smoothed the white sheets

with your practised fingers,

then gently placed me as you desired:

Amanda Bonnick’s ‘Poppy by the Severn’ is never far from “the War to end all Wars” but she also likes to remember it as it was before that momentous time. The time

when it was just a coquelicot,

an innocent coquette, a tease,

among the summer wheat.

Her use of the word “coquelicot” to describe its shade of red even at this point reminds us of Flanders and the Somme since it was originally a French vernacular name for the wild corn poppy.

The notion of pressed flowers takes on a different dimension in Suz Winspear’s poem ‘Loosestrife’ where two land-girls lie together at the edge of a wheat field where “their backs pressed the blooms” of purple flowers destined to hold the memory of their “unrationed love” for all time. Something of the bliss of that moment is to be found again in ‘Our Heaven…Ours’ by Math Jones where a door finally opens and we are offered a glimpse of the afterlife:

with you at my side,

stepped into this fabled garden,

This collection is a testimony to the power of flowers. As Charley Barnes says in her introduction, “the final result is a garden to behold”.

◄ 'You see only what you want to see. Maybe you always did.'

Drawing the line: Ray Pool looks back at last days of steam ►