Abruptly, without any fanfare, Paul Muldoon began his reading at Winchester poetry festival by fishing out his mobile phone and reading John Keats’ poem ‘To Autumn’. Afterwards he said merely that his audience would have been aware of the associations (Keats wrote it during a visit to Winchester, inspired by a walk he had made in the city). It was quite an inspirational reading by Muldoon, who could almost be described as one of poetry’s superstars, if such figures exist. And thus an inspirational start to Winchester’s poetry festival weekend – three days of live, in-person events which are marking the culmination of this year’s ‘stretched’ festival.

Winchester’s poetry festival, which normally takes place every two years, would have been due to happen last year, but was shelved because of the pandemic. Instead this year its organisers came up with the idea of a ‘hybrid’ festival, taking in both online events over five months, with ‘the real thing’ during this weekend of 8-10 October.

Muldoon, who had flown over from America especially for the gig, was also taking part in a discussion/interview on the Saturday. On Friday night he read from a new collection due to be published next month, and plucked a word from the famous Keats poem – ‘granary’ – to associate it with his first poem, ‘A Ruin’, about a building fallen into disrepair – “windowless, roofless” - along the M1 in Northern Ireland. The poem also contained these lines – “the bungled peace process, the shoddy bungalows” – that to me exemplify his craft.

He enunciates each word clearly and slowly, in a mellifluous, confidential tone, and exudes an extremely relaxed manner, a dry, deadpan delivery with plenty of humourous asides.  Muldoon introduced one poem as “set on what we used to call the Continent – do we still call it that?” And offered his glass of water to an audience member: “There’s a little cough that’s going around these days.”

He half-apologised for the length of his final poem, ‘A Bull’, stopping to wonder at, or pretend to be slightly embarrassed by some of the rhymes, more luxurious and ingenious and almost endless than any that you might expect from the average performance poet. 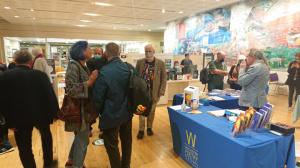 And ’superstar’? Well, Muldoon – his hair showing only traces of his former Dylanesque appearance these days -  was born in Northern Ireland, was mentored in Belfast by Seamus Heaney, and has published more than 30 collections and won a Pulitzer prize for Poetry and the TS Eliot prize. He is a professor at Princeton University, was Oxford Professor of Poetry from 1999 to 2004 and has also served as president of the Poetry Society and poetry editor at The New Yorker.

All these facts and more were relayed in his masterly introduction by Stephen Boyce, who also welcomed Clare Pollard, the other poet taking part in Friday’s main reading.  Clare, who is editor of Modern Poetry in Translation, read from two of her collections, The Changeling, and her most recent Incarnation.

She introduced one poem, a ghazal, by confiding: “Because I don’t know how to pronounce the word ‘ghazal’, I’ve always avoided reading this poem.” She wound up with a long and remarkable and often very funny poem called ‘Suffer’ which lists all the things a pregnant woman is warned to beware of.

Earlier the festival had been kicked off by three performance poets from the Southampton area, Ghost River Collective. They should have consisted of a woman and two blokes, but Anita Foxall was unwell, and so Stuart Taylor stepped into her shoes, to join Damian O’Vitch and Dave Hubble. All the chaps were entertaining in their different ways, with poems about launderettes and Ikea, ‘healthy’ eating, the England women’s football team, a couple about farting, and one about consuming an earthworm milkshake. 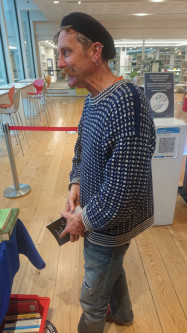 I should also mention Jonny Fluffypunk, pictured, the festival’s Poet on the High Street, who has been going out into the community and collecting stories and poems from locals, to be put into an anthology. He said he had heard fewer stories about King Alfred – there’s a statue of the Wessex champion in the city – and more about a character called Burping Ron, if I’ve written that down correctly. He looked forward to collecting such anecdotes into something that might reveal another side to this well-heeled area beloved of estate agents.

There was also a wonderful secondhand poetry bookstall, made up of donated, quality poetry books at bargain prices, which I spent a long time at. It will be there for all three days of the festival weekend. And after my first visit to a poetry reading in 18 months, I leave any sort of verdict on online v in-person events to poet Stuart Taylor, who said: “It’s good to see a real, ‘trousers-on’ audience.” Amen to that.