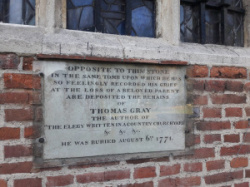 Boris Johnson found himself rooting around for metaphors among the dead in a country churchyard when he recruited the 18th century poet Thomas Gray to support his “levelling up” agenda in his speech at the Conservative party conference on Wednesday.

Not to be outdone by Labour leader Sir Keir Starmer – who he dismissed as a “seriously rattled bus conductor” [‘Do any buses still have conductors?’ - Ed]  – the prime minster also turned to poetry when delivering his leader’s speech. Johnson quoted Thomas Gray’s ‘Elegy Written in a Country Churchyard’, which reflects on unsung locals that may have missed opportunities.

He said Gray wrote this in the Buckinghamshire village of Stoke Poges, which is close to Slough, and is now one of the wealthiest villages in England.

The prime minster added that “levelling up” would work for the whole country as it would take the pressure off places like Stoke Poges.

Thomas Gray, like Johnson, was an old Etonian. Here's what Johnson said about the famous poem, and about Stoke Poges:

"When Thomas Gray stood in that country churchyard in 1750 and wrote his famous elegy, as the curfew tolled the knell of parting day, he lamented the wasted talents of those buried around him, the flowers born to blush unseen, the mute inglorious Miltons who never wrote a poem because they never got to read, the simple folk who died illiterate and innumerate, and he knew that it was an injustice.

"Let me ask you, maybe you know, where was he standing when he chewed his pensive quill ? Anybody know? Correct, thank you, he was standing in Stoke Poges. My friends, there may be underprivileged parts of this country but Stoke Poges is not now among them.

"In fact, it was only recently determined by the Daily Telegraph - and if you can’t believe that, what can you believe, my friends? -to be the eighth richest village in England. Since Gray elegised, Buckinghamshire has levelled up to be among the most productive regions in the whole of Europe.

"Stoke Poges may still of course have its problems, but they are overwhelmingly caused by the sheer lust of other people to live in or near Stoke Poges."

Arguably, the reference was more about property prices in Stoke Poges, than about poetry. Although maybe the cachet of Gray is a factor in the area's popularity. Later in his speech the notoriously erudite Johnson delved back even further into British history to insert a joke about “Hereward the Woke”. He also coined the extraordinary slogan "Build back beaver" to trumpet the return of endangered and extinct species to Britain's rivers.

I think Boris's references must be as out of balance as many other of his insane policies. I remember Stoke Poges trying to find one of about three golf clubs which it boasts, jealously guarded by their anonymity from the road. Perhaps his comments should be classed more as an allergy than an elegy, with regard to his ologies.

I suppose BJ should know all about problems overwhelmingly caused by sheer lust. Still, nice to know that Stoke Poges has been levelled up.