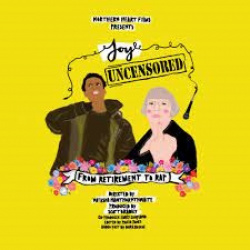 A short documentary film about performance poet and rap battler Joy France has won the best documentary award at the Women Over 50 film festival. The documentary titled Joy Uncensored, made by Northern Heart Films, is described as “one woman’s daring attempt to embrace retirement unconventionally … 64-year-old Joy France breaks gender and age stereotypes by competing in the brutal, youthful, male-dominated world of battle rap”.

Joy, who performed a specially commissioned poem at the festival, cut her poetic teeth on the open- mic stage at Write Out Loud Wigan several years ago, and is now an established performance poet. More recently she took on the male-dominated world of battle rap – and came out a winner, even if she had to put up with being dubbed a 'battling granny'.

In a TV interview last year she said she was “always really shy, really quiet” for ”almost all my life”. But in her mid-50s something happened – and she became a performance poet, winning slams and awards, and treading the boards as a stand-up comic as well as a poet.

In recent years she has run a creative space at Affleck’s in Manchester, an emporium of independent traders, where she encourages people to explore their own creativity. She is also known to don a panda mask at the drop of a hat, when staging impromptu performances, and at one time was the ‘face’ of Nationwide Building Society adverts.

You can watch the documentary trailer here 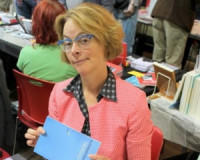