The poetry of Coventry: things that Larkin forgot to mention 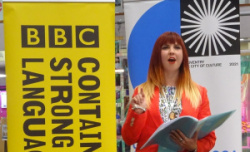 The opening verse from a poem by Philip Larkin is inscribed on a plaque at Coventry station. The poem, ‘I Remember, I Remember’, concludes in typically downbeat Larkin fashion: “ ‘Nothing, like something, happens anywhere.’ ''

Larkin, who was born and bred in Coventry, and is known as the most curmudgeonly poet in England - and a lot more besides - was speaking personally, about his own early life.  The fact is, a lot has been happening in Coventry just recently – and in the past, too. The BBC’s Contains Strong Language festival has come to Cov to mark its 2021 City of Culture status – and on Sunday performance poet Luke Wright, a man fascinated by the state of England, and its places, hosted a BBC Radio 4 programme featuring a group of writers, all with a keen interest in and fondness for the city.

Coventry’s new and first poet laureate, Emilie Lauren Jones, pictured, read her poem ‘Jay-Z comes to Coventry’, and later another one, ‘The Men from the Drawing Office’, a tribute to the city’s industrial heritage inspired by her grandfather, who worked at Massey-Ferguson tractors. Its extensive Coventry factory, a fixture in the city for 56 years, closed in 2002.

The Midlands city suffered heavy bomb damage in the second world war, most famously to its cathedral, which stands as a ruin besides its modern replacement. Emilie startled Wright by revealing that as schoolchildren “we were taught that we are ‘phoenix children’ ‘’, rising from the ashes of the bombed city.

An arresting and inspiring classroom image. Musician, actor and writer Pauline Black of The Selecter, part of the city’s 2 Tone explosion of ska and reggae music of the late 70s/early 80s, spoke of Coventry’s “legendary, world-famous” Ring Road, and how “a lot of people came here from other cultures … they gave Coventry a different flavour to what it had pre-war.” Mentions were made of local-born novelist George Eliot, and the hidden Sherbourne river, which flows beneath the city centre.

Award-winning poet Liz Berry is from the Black Country, a Midlands region somewhat to the west of Coventry. But she said: “In many ways the Black Country and Coventry are quite akin … both places form the outside have the reputation of being less than beautiful, that other parts of the country make jokes about.”

She has been commissioned to write poems about Coventry’s London Road cemetery. She read two poems – ‘Candelabra Lime’, about the grafting of two trees together, that symbolised long-term love for her, and ‘Small Flowers’, about the graves of small children with wildflowers growing around them. She said the cemetery had been converted from a “dark quarry” into “a beautiful huge garden”, full of “gloriously moving and eccentric monuments”.

Poet and playwright Amanda Dalton – “a born and bred Cov kid” – read her poem, ‘Cov’, about her  childhood, which lists a host of city locations. She talked about the modern cathedral, built alongside the bombed-out one. It was designed by Sir Basil Spence, and opened in 1962.

Some locals had mixed feelings about the new cathedral at first, found it odd and too modern, especially the Graham Sutherland tapestry: “Now it’s just an extraordinary space … possibly the most moving building I’ve ever been in. There’s something potent about the juxtaposition of the old and the new.”

You can listen to the programme here

'It's all yours, this father you make each day' ►