A Weekday Walk Up Whernside 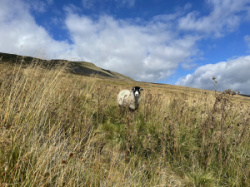 Along with many others it seemed
we had chosen a good weather day
Groups of schoolchildren, friends and couples
we met along the narrow pathway

We climbed up the long limestone stairway
beside the train track and gentle stream
To the left hand side, a small tarn
the vertical backdrop appeared extreme

The pie crust top of Ingleborough
looked harsh under a threatening cloud
In the far distance Pen-y-ghent
the smallest of the three, yet tall and proud

The descent was steep, sharp and rocky
some of the steps difficult to take
My aging knees took the strain and pain
and my tired legs began to shake

Well done, Julie! You paint a glorious picture of the three peaks.