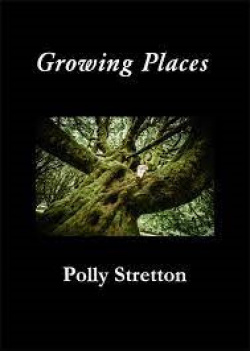 Chair of the OU Poetry Society, poet, coach and mentor Polly Stretton is the author of three previous full-length poetry collections, Girl’s Got Rhythm (2012), Chatterton (2014) and The Alchemy of ’42 (2020).

Growing Places is a collection of 58 poems divided into eight sections defined by place: Malvern, Malvern Hills, Worcester, Crown East (an area of Worcester), Croome Court (a neo-Palladian mansion in extensive parkland near Upton-upon-Severn), Droitwich, Fantasy Places and Leigh. In her introduction Stretton writes that this collection is a sequence of poems where she grew. Interestingly, she chooses to settle for “grew” rather than “grew up” because these are not only the places where she grew up but they are also turning points, places real or imaginary, where the process of growing never ends.

Stretton draws her inspiration from personal memories, places real or imagined, paintings, a sculpture trail, life experiences and Norse mythology. Some poems were written in response to specific projects set up by Nina Lewis, a former Worcestershire poet laureate, in 2017.

Her subjects, among others, include her early childhood, lychgates, signal boxes, odd spoons, newspaper rounds, a head gardener at Croome Court, ash dieback, climate change, herring girls and a vengeful ghost.  The variety of subject matter is matched by a variety of poetic forms that Stretton chooses to employ as a means of expression. Apart from several sonnets, there is a villanelle, a sestina and a kyrielle. The latter is a French form of rhyming poetry written in quatrains where each quatrain contains a repeating line or phrase as a refrain, usually appearing as the last line of each stanza. It requires considerable discipline because each line must consist of only eight syllables.

The sonnet ‘Malvern Hills’, a descriptive piece about a flock of swifts circling above Midsummer Hill, is a beautiful synthesis of alliteration and internal rhyme. The sonnet begins and ends with a word whose initial letter is ‘s’ and words beginning with ‘s’ occur with frequency  throughout the whole piece. Clusters of words with letters that recur in a different order, (‘drift, flit and lift’, ‘darting, diving divas’) also add to the magical soundscape of this poem.

‘Raw’ captures something of the essence of the Malverns where Stretton’s choice of words (“ridgebacked” and “waved hills”) describe so accurately the terrain beneath her feet. Given that we are in Elgar territory, the “myths of monsters, fairies, giants” put me in mind of Elgar’s composition Fairies and Giants from the early Wand of Youth suite.

‘Spring’ is a model of concision. Stretton packs a lot of detail into eight lines. The third line “boys and clinker don’t mean too much” immediately caught my attention. The collision of two completely unrelated words “boys” and “clinker” clashed beautifully in my mind. It was only later in the poem that I was able to make the connection more clearly:

Banish the blues with a red touch;

blend them purple for tomorrow,

boys and clinker don’t mean too much

warm debris for the wheelbarrow.

Pigeons perch on the old scarecrow,

who imagines lilacs in spring,

they watch the boy make a furrow

and prepare for life on the wing.

In ‘Folk Like Us | Winds of Change’, an ekphrastic poem inspired by a painting by Graham Wilson entitled Saturday Morning, Stretton paints in words a wonderful description of 1950s Middle England when “pop-music [was] positioned / to take over the world”. It is one of a series of poems whose double titles provide an added dimension to the subject matter. Others include ‘Becoming the Sea | Amphitrite,’ ‘The Herring Girls | Gutted’ and ‘November | Heading for a Country Winter’ which was written in response to Léonie Adams’ poem ‘Country Summer’. Like Adams’ lyrical poem, Stretton’s, with its “lark’s-bite berries” (an echo of the original), is reminiscent of metaphysical and romantic imagery.

Concern for the environment is evident in ‘Gull over the Flood’ which has more to do with frequent flooding events than the Severn Bore, and in ‘The Banished Ash | Yggdrasil’ where Stretton draws our attention to ash dieback, an unwelcome follow-on from Dutch elm disease. By choosing Yggdrasil as her title, she offers us a glimmer of hope because, in Norse mythology, after Ragnarök (Doomsday) the giant ash, though badly shaken, was to be the source of new life.

Reading this collection I was struck by Stretton’s lightness of touch, rhythmic vitality, sense of humour, and ability to make even the most domestic of scenes come to life. Her subjects are imbued with a magical quality – “faerie folk” catching “moonlight in jars”, goddesses like Amphitrite, the majesty of the Malverns and the wisdom of trees. This is a collection that really sings. Fully recommended.

◄ Delayed by Covid ... but now Manchester's poetry library has opened its doors