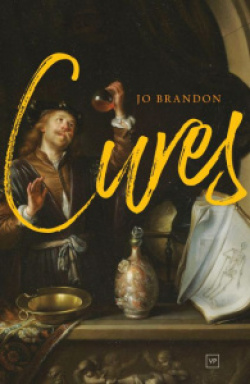 Jo Brandon has worked as a domestic for the Royal Household, and as a tour guide, as well as an administrator for the Poetry Society and the Poetry School. She is now a freelance poetry editor, librettist, and literary events host. Cures is her second full-length collection.

Such a title published in these pandemic times might lead to a reviewer to jump to conclusions. I  would describe this collection as a cupboard or maybe antique shop of curiosities, bursting with clever and ingenious poems, often with a historical flavour.

It is divided into four sections – Bedfellows: Hysteria & Melancholia; Grand Erotisme & Bottled Ecstasy; Malady-Riddled; and Settle & Soothe. The opening poem ‘Sowing’ has a sexual undercurrent; ‘Staying Under’ looks at the past perils of a new mother leaving her bed too soon; ‘Wednesday’s Child’ deals with the kind of advice you’d never get from the National Childbirth Trust.

Many of the poems are based on stories, rather than established facts. Brandon revels in the grotesque, imagining Sir Walter Raleigh’s widow walking around with his severed head in a bag for company: “She finds comfort in its heaviness, / the way it bumps her thigh when she walks.”

She considers the belief of some that Emily Bronte’s sister Charlotte destroyed an unfinished manuscript upon her death (‘Emily’s Book’). And she conjures up the 18th century bonesetter Sally Mapp – ‘Cracked Sally’ – and the prejudices she encountered. In the case of ‘Walter’s Wife’, based on a Victorian diarist whose memoir detailed his sexual experiences, his wife is unable to respond to his advances after he frequents prostitutes:

I am no different to her – for him;

one an outdoor privy,

the other a chamber pot.

The collection also encompasses a poem about the retirement of Britain’s most prolific rat-catcher in the early 20th century, as well as one about the joys of Pontefract Cake (“I like the inside of my mouth turned black / like a cavern”). It concludes with more comforting poems about love, family, motherhood, and Christmas.

The cover design by Peter Barnfather is to be commended, utilising the painting The Physician by Gerard Dou. This is a collection recommended to those who savour the playfulness of words, by a poet that revels in and seeks out bizarre subjects, often to be found lurking in dark corners of old curiosity shops.

'It takes three days to tow our brokenness across the state' ►