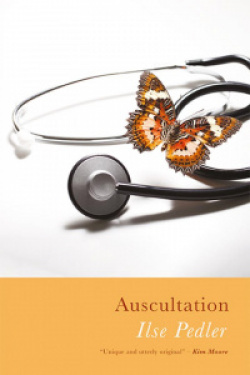 Born in Derby and raised in Birmingham, Ilse Pedler now lives in Kendal where she runs her own veterinary practice offering holistic treatment for animals in Cumbria and the north-west of England.

Auscultation refers to the act of listening and in medical terms it is the act of listening for sounds made by internal organs, such as the heart and lungs, to aid in the diagnosis of certain disorders. The cover artwork showing a stethoscope is self-explanatory. The addition of the butterfly reminds us of heart palpitations, ‘chest butterflies’ – so-called because they feel like butterflies fluttering in the chest.

Given Pedler’s occupation, it is not surprising that there are a fair number of poems in this collection that arise out of her experience as a vet and that these exploit the use of specialist language for added effect. The names of some surgical instruments such as ‘Backhaus towel clips,’ ‘Mayo scissors,’ and ‘a Volkman scoop’, for instance, make for a refreshing change from mainstream vocabulary. The best of Pedler’s poems are to be found in this first section even though she writes with a complete air of detachment. ‘Castrating Calves’ is a very fine example of a poetic form known as the ‘golden shovel’ in which the last word of each line forms a second, pre-existing poem, to which the poet is playing homage. In this case it is ‘The Red Wheelbarrow’ by William Carlos Williams. The  line breaks used by Williams which alter what we see at each turn (first a red wheel and then a red wheelbarrow, first rain and then rain water) is recast in Pedler’s poem where the colour red becomes “red-tailed” and, later on, the colour white becomes a “white thin wrist”. Here is the poem in full:

One by one the sweet-breathed calves – so

innocent – are held as much

as is needed, which depends

on the sharpness of her knife upon

their soft hairless pouches of skin. A

practised cut releases the slippery warmth, a pull and twist and red

the last of their lives, while out in the rain,

beading the mats of their coats – know to stay beside

her ready to snatch at the mouthfuls of freed flesh. The

woman straightens and with a flick of her white

thin wrist throws the last of them to the chickens.

Other poems in this section that caught my attention were ‘Every Time A Performance,’ ‘The Calving,’ ‘The Importance of Air’ and ‘Shearing Sheds.’ In all of these, Pedler is very much in top form.

Further in, it is clear that there is more to this collection than hard-working sheepdogs, operating theatres and tractors with GPS steering systems. Several poems dwell on family life, in particular, the discipline of enduring a strict, uneasy upbringing and a heart-rending sequence at the close about the experience of being a stepmother. These poems seem to come from a bleak place and, while not all of them worked for me, some readers will doubtless identify with them in their own personal way.

Animals are frequently mentioned in this collection, not just in the earlier sections where they are inseparably linked to the (true) names of surgical instruments (rat-tooth forceps, mosquito forceps, crocodile forceps, etc) but also in later sections of the book.

Pedler is a skilled practitioner when it comes to experimenting with poetic form. ‘The Importance of Air’ is a sestina; ‘CaCO₃’ is an anagrammatic poem where the end of the line in each couplet is an anagram; ‘Behind City Doors’ is a pantoum and ‘Mothering’ is a villanelle. ‘Chiropractic’ works as a visual poem for me, its short, skeletal lines and long vertical structure replicating the spine. There are also a handful of poems written in couplets and tercets and the title poem is, in places, a sound poem:

In ‘The silence is’ the white spaces between the words and the stanzas add emphasis to the awkward embarrassment of trying to keep a stiff upper lip while waiting in an undertaker’s office. In other poems, such as ‘Lines of Communication’ and ‘Love Song’ Pedler writes convincingly about connection and disconnection and, in ‘Fairy Tales and Step Monsters’ about “holding things together / while the glue dried”.

It is evident that listening is at the heart of this book. If anything, it is a plea to us all to listen more carefully, not only to what our bodies are trying to tell us, but also to what other people are trying to tell us either about ourselves or, more often than not, their own situations.