In An Ideal World I'd Not Be Murdered, Chaucer Cameron, Against The Grain Press 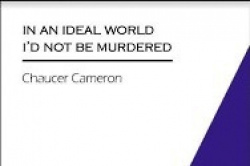 The epigraph says it all: To my dearest Helen & [                ]. This magnificent book, part memoir and part fiction of the author’s experiences in the sex industry, exists to give voice to those muted and a presence to those prostitutes murdered. As a novelist as well as a poet, I’m obsessed with the issues of voice and point of view and Chaucer Cameron’s book uses these two devices expertly and very effectively. The book is so rich with the choices she has made with regard to POV and the way she deploys voice. The book sings with them.

In many of the poems - 'Body Marks' and parts I-III of 'King’s Cross Café' for example - Cameron’s narrator acts as a kind of camera/recorder, capturing snippets of hard-won advice, complaints of injuries inflicted by punters, the banter between women at work. In ‘Trixie Is a Whore’, the first-person narrator is a “customer”, evaluating his own prowess with Trixie because of how quickly he can make her urinate with his finger and gauging her (very young) age according to how “tight” she is.

In what I think may be the most powerful poem in the collection, ‘Coup de Maître’, the act of devouring a shellfish is made explicitly like the act of emotional evisceration during paid sex. The power is only one way and it is a brutal, total destruction. I found it a very difficult poem to read, but a necessary one, of course.

The large cast of characters in the book include Crystal with her switchblades, Ellen who is murdered on the Green, Caprice, Eve, Morgan, Grace, Ash (so important that these women are given their names and their stories recorded). These poems are set in a hellish hall of mirrors, but instead of reflections, what the reader is presented with are vulnerabilities, desperation, fear. These women have no choices available to them at all but, even within their devastating world, there are small victories and moments of relief, comedy even: ‘’ ‘That is Jaen,’ says Crystal, pointing towards the sleeping woman. ‘J A E N, not Jayne with a Y, or even plain Jane, but, J A E N, for god’s sake, talk about making life hard’.”

As a white, middle-class male, I cannot even begin to imagine what it must have been like for Cameron to survive in this world. But survive she did and I think her greatest achievement is being as brave as she so clearly has been to return to it once more to give voice where there was none and give these women some dignity and respect. There will be plenty of books of poetry that grab the headlines and win prizes this year, but none of them will be as important as this one.

Chaucer Cameron, In An Ideal World I’d Not Be Murdered, Against The Grain Press, £7

A controversial combination indeed...sex and another equally
immediate form of self-exposure...poetry! No doubt there is room
for this concept and poetry itself has its ancestry in matters of
this nature, going back to antiquity. Selling one's "assets" in
whatever form is a theme that always remains of interest, and
if that asset is the body then the interest becomes even more
personal. Prostitution takes various forms and, indeed, enjoys
degrees of "status" amongst its practitioners and their clients.
It has been described as "the oldest profession" and despite
the passing of time and progress in the human condition, will no doubt remain with us; not necessarily through necessity,
but because there will probably always be those who actually
choose to take pleasure and reward from it for their own reasons. The true pornography in life is not sex but violence.
The tragedy is that social pressures and religious dogma
often result in a perversion of both, with the former blamed
for the latter. Humbug and hypocrisy remain curious "constants" in human existence.