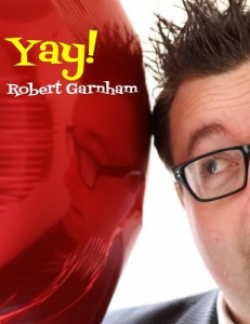 An acclaimed performer of comedy poetry, Robert Garnham reads his poems at fringes and festivals. His work is double-edged, humorous and entertaining but also profoundly connected to the human condition. Occasional love relationships give momentary instants of fulfilment that quickly end in rejection and loneliness. Joy and sadness alternate in a rollercoaster ride that always ends with hope – yay! In spite of cold rain and harsh winds, lukewarm tea and the banality of ordinariness, and despite boredom – a monster that drains our vitality – that lingers, life is worth living even with its unpredictable sides.

During his performance of Yay! The Search for Happiness at The Keep pub on 13 July as part of the Guildford Fringe Festival, Garnham traced his journey from being bullied at school for his “abnormally big sideburns” to a narrative inspired by seaside scenery that was full of puns and stories of practical jokes, eccentricities and summer escapism but also loneliness and occasional conversations about death. Being alive is a relief but carrying on can be hard. “Be yourself” is his final remark, “not someone other”, and end with a smile and with a “yay!”

The positive prevails in most of the poems in this collection in a playful, warm way, celebrating life from his gay perspective in an honest, straightforward approach. The bittersweet tone that pervades some of the poems never leaves space for total negativity but always finds the quirky side, reversing common ideas and creating paradoxes that are often funny and always surprising. Most of the poems are written to be performed, and Garnham gives his best version of them during these performances. The onomatopoeia, rhymes, alliteration and repetition communicate the vitality of his lines but also the meaninglessness of our repetitive actions:

Sand in your rucksack,

Sand in your flapjack,

Sand in your arse crack.

Let’s go to the pub.

Gotta get through the day,

Gotta do your thing.

Gotta get through the day,

Feel it deep within.

Sounds matter in these poems; the rhythm is profoundly engaging, a technique that Garnham employs to explore themes and recollect memories through words. These words create a fictional world that is intensely human and eventually optimistic and generous.

My hopes and dreams lay as tattered

As the rancid fur on the flanks of the yak.

The yak at the back of your car.

You become used to the toil, the noise,

The discomfort, the salt-flecked waves,

The aching limbs, the treacherous decks, the

Long hours, the constant motion, the

Tight space, and that sense of being at one

With a metal craft whose upkeep ensures

Nathan went for a walk in the rain,

Felt the cold drops sting, thrown by the wind

Often he felt he could disappear

Less than a ghost,

Scared by its own haunting.

(‘Nathan Went for a Walk in the Rain’)

But Garnham always surprises his audience with unexpected turns, revealing fresh imagery that engages the reader in a thought-provoking perspective. Life, after all, is not so easy to live, and the search for happiness can be a long, difficult journey with fallouts and backlashes. The final result is temporary and uncertain in a ‘Circus of Mediocrity’.

In the final poem, ‘Seaside Surrender’, there are “sudden visions of beards and badgers/The Titanic, cups of tea, camp cats, neon yaks,” and other images that flash before his eyes; it is an epiphany of memories that make him feel alive. The final remarks after the acknowledgements cleverly conclude and summarise the leitmotif of this collection in an understatement that highlights its significance:

I’m insignificant, I’m ever so small/In the scheme of things, I hardly matter at all/The latest thought, that I have thunk:/If I were a boat, I’ve probably sunk/But this is my book, and you’ve been reading me/Inside I’m jumping up and down with glee/Wheeee!

This is a realistic personal view that does not surrender to mediocrity though acknowledges it as part of our human condition. But inside ourselves there is always space to cheer up and enjoy life.