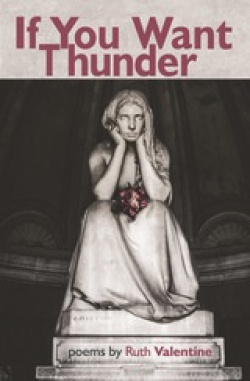 Ruth Valentine is a writer of poetry, novels, short stories and non-fiction. A number of her previous poetry collections – Downpour, On the Saltmarsh, and The Tide Table – suggest an interest in water as a theme. Other themes that appear in her latest collection, If You Want Thunder, are decay and mortality. She is also a funeral celebrant.

The first section of the collection, titled ‘Sea-Fret’, is very much focused on the plight of refugees at sea, with lyrical and often terrifying poems such as ‘Jettisoned’, ‘Journey’s End’, ‘Lamentations’ and ‘Spite’: “The sea is a pagan goddess, always hungry. / She tosses you hand to hand like a bruised apple.” (‘Journey’s End’)

The untitled second section begins with ‘Like Tolstoy’, advocating a railway station waiting room as a suitable place to die, rather than in hospital or hospice, or “on an industrial estate in Switzerland, / being filmed stating Yes I understand / if I drink this liquid …”

St Pancras before it became a shopping mall

and they hid the trains; wood-panelled ticket office,

past the gasometers to an improbable

But the number one station for dying in

must be Ljubljana: the driving snow, the boys

off to art college in Venice, the gun-metal

the life beyond: Budapest, Bucharest,

‘Purple’ relates the pathos of the hunt for a woman’s suit brought in to a dry cleaners’s the previous autumn, and now needed for the undertaker’s;  ‘Cobalt Variations’ is a long and beautiful elegy for a woman in hospital after a stroke who once in a photo looked like Jackie Kennedy; ‘Smoke’ addresses someone who is flying back after a Christmas break as cremated ashes;  and ‘Transhumance’ anticipates decay and death, and the moment when “I’ll no longer have the words to turn it into a poem”.

As mentioned earlier, Valentine has a great fascination for and understanding of water, and its movement. ‘The Inshore Waters’ contemplates suicide by walking into the waves:

could you keep on walking deeper until the waves

felled you and held you under?

Another section encompasses such subjects as the continuing conflict and carnage in Syria, the Iran-Iraq war, and knife murders in London. And then there is ‘A Grenfell Alphabet’, in which Valentine looks inside the homes of those who died, finds cuckoo clocks, clock radios, Haynes manuals, gardening manuals, eggs in the fridge, hats, ice cream, keyrings, mattresses, wheelchairs, “X the unknown number of the victims … Y the questions nobody wants to answer … Z for the zero that is Grenfell Tower now”. This poem and its stanzas enumerating 24 floors is a masterpiece of humanity and empathy.

Ruth Valentine finds poetry and lyricism in water and mortality; two very big and often linked subjects. Her collection leaves you to find your own, over-arching metaphor; for me, it is standing on the shore, watching and waiting for the tide to come in.

◄ 'I want to kiss them as I hurt to be kissed'