'It's been a difficult time for everyone, but we're proud of our track record': Indigo's Ronnie Goodyer and Dawn Bauling 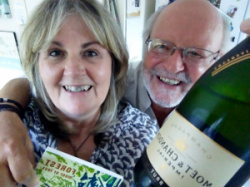 Publishers and partners Ronnie Goodyer and Dawn Bauling of Indigo Dreams recently notched up two more Saboteur indie awards - for most innovative publisher, and for best collaborative work for their joint poetry collection, Forest moor or less. They run annual pamphlet and full collection competitions, regularly publish three magazines, and have a very loyal band of poets and supporters. Their latest initiative is the Indigo Wild Nature poetry, with submissions opening on 1 July. Write Out Loud’s Greg Freeman caught up with them just before they took a well-earned holiday break:

Your series of successes as Most Innovative Publisher in the Saboteur awards, either winner or runner-up ... it's a great track record. What do you put it down to?

It is indeed a record we are very proud of. It is multi-faceted: it speaks for the poets and collections we select, the production quality, pleasure of the process and the response from the readers who buy them. We’d also like to think that our “pleasure not pressure” way of working with our poets leaves an impression that they in turn may pass to their readership. The first acknowledgement of our work was in winning the Ted Slade award for services to poetry in 2015 – the first joint winners in its history. We knew our friendly but efficient method of working was working! We have supporters of our three magazines, one of which, Reach Poetry monthly (shortlisted in these awards, too) has been published for nearly 23 years (issue 274 coming up) and has acquired an extremely loyal following. It is, we believe, the UKs longest running current monthly printed poetry magazine. Place these together, with such a following, and our authors, purchasers, encouragers have a voice though these awards, which they were motivated to express in huge numbers. We can’t thank them enough.

Tell us a bit more about three magazines you produce. How do you manage it all?

By working too hard! Dawn looks after the quarterly The Dawntreader and Sarasvati, Ronnie the long-established monthly Reach Poetry. The biggest challenge is Reach because of its turnaround - but 270-plus issues shows it can be done. Because of the sheer volume of submissions over the last year or two,  Reach is for now only accepting submissions from its many subscribers. It would be impossible to manage as a monthly magazine in the current climate if it were open.

How has the pandemic affected you as publishers?

It’s been a difficult time for us all and the indie publishing industry was no exception. Bookshops/distributors closed, printers and others with fewer staff/longer turnaround. The collapse of a major wholesaler meant a huge amount of our books were returned to our distributors which effectively wiped out about three-four months turnover. We were set though to ride through this, and our supporters continued to buy our collections. Some authors delayed, waiting for things to improve, but sufficient numbers pressed on with scheduled publication dates to enable cashflow to continue – and indeed sales vindicated that choice. We’re waiting for the glorious days of physical readings to return, though! By far our greatest sales area is direct sales through the website and exposure to the public through readings, plus social media and a good response to our Indigo News monthly newsletter helps that along. Personally it was hard, with Dawn [an NHS key worker] quite understandably being called in to work for the NHS much more than usual, leaving Ronnie to guide Indigo through this almost single-handed. This was compounded by a 200% increase in submissions, with people having more time to write.

In what ways would you say that you are developing and moving in new directions as publishers?

We have a formula and raison d'être that is honed but largely unchanged. We aren’t particularly influenced by reputations but by what we read in front of us, and the manner in which it is presented. We love working with our authors and want to make the whole experience one to cherish. We’re particularly proud of the number of poets who experienced their first publication through us – and enjoyed it! Some of them are now established prize-winning poets. Next year we will be publishing fewer collections, giving ourselves a little more time for other things including our own work. We loved working on the recent anthology Dear Dylan which not only contained poems after Dylan, but a ‘letter’ directly to him. We will be thinking of similar innovations, as well as the second anthology for League Against Cruel Sports (Ronnie is their poet-in-residence).

What gave you the idea for your enchanting and Saboteur award-winning collaborative collection, Forest moor or less? Is a further, similar one planned?

We live in a wooden, ex-forester’s house in Devon. We are surrounded by the seasons, ever-present birdsong and activity. The natural world is our norm. Not too good if you want to nip down the shops, but great if you want nature to  surround you. We wanted to capture it, our life experiences together and invite people to get to know us. As Jim Bennett of Poetry Kit wrote, “where it all seemed to belong. You don’t put yourself into a poem, that is where you find yourself. I feel I found you both between these pages in a beautiful way.” We were genuinely moved by the reaction and have already exceeded our initial sales expectation fourfold. For the future, Dawn is working on a pamphlet based on her popular Twitter posts @wavelace, while Ronnie is likely to progress his plans for an illustrated pamphlet on his beloved Dartmoor. Together we  are looking towards a joint collection from experiences in France and Greece – working title ‘Unplanned Margaritas’. It should be fun!

◄ The terrible and the absurd: a Simon Armitage film-poem Where Did The World Go?

How to Wear a Skin: Louisa Adjoa Parker, Indigo Dreams ►