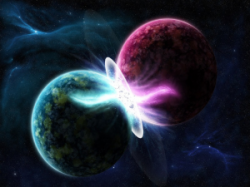 Once upon a time on an icy hill,

Round and round and up and down,

were trying to explore the entire town,

amidst this process of fun and pun,

became reason for each other's frown.

And hence its time to depart away,

before it gets deteriorating decay,

without any regret and heart filled with love,

let me wave my hand and say goodbye.

Lesson learnt is don't be good to all,

that will eventually make you fall,

more so, when fail to get acknowledged,

so now, raise your head and stand tall!

◄ I AM PROUD OF YOU!