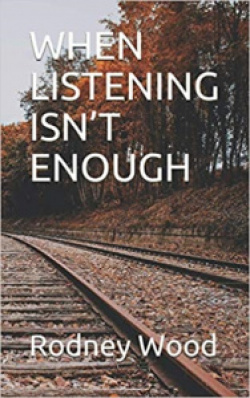 Rodney Wood’s second pamphlet is an original and powerful sequence of 21 poems about a challenging time the author experienced, his own difficulties interweaving with stories told by ‘Steve’, whom he meets at a railway station after work.

Wood’s poems have a performative style that fits well with his role as co-compere of Write Out Loud Woking open mic and as leader of Woking Stanza group, where he runs workshops. His poems are characterised by keen observations expressed in striking fresh images that convey an unexpected view; revelations of sorts that always surprise the reader.

Such epiphanies interweave in the conversation with a stranger who becomes his alter ego, a companion in an infernal journey. The innovative use of language recalls the situation the protagonist was experiencing at the time, and the problems of ‘Steve’ – his addictions, sense of failure, and depression:

under the obvious & meaningless sun / the cage & weeds / of London Road

my wounds have yet to heal / under the obvious & meaningless sun

In this atmosphere of dejection and emptiness, “in a world of appearances”, Dante’s Inferno is evoked in the figures of the damned, who are “buried to the neck”; they are the damned souls in the Caina, the traitors to relatives whose punishment is to be buried in different positions in the iced lake of Cocytus. The literary reference is probably not related to the sin but rather to the condition of being damned forever and to the harshness of the punishment. In contrast to Dante’s Divine Comedy, in Wood’s sequence there is no positive progression, reconciliation or redemption. The poems trace a cycle in which the end reiterates the beginning:

Steve’s walking in circles / the weight of London Road

(‘Watching from the Bridge’)

Physical decay affects the final poems in a world that is indifferent to the protagonist’s terrible situation. Listening isn’t enough; we cannot turn our head away – we need to be involved, empathise and find solutions in order to save people’s lives.

Wood says that ‘selling the book is not my priority’ and that he is giving the book away to people he admires and to friends or is swapping it for a different book. The profits from any sales will be donated to national charities such as the Samaritans that work to help people in difficult situations. This is a compelling sequence that contributes to the awareness of the human condition by raising a flag for the unlucky ones and revealing how far we can go when desperation hits.

Background: 'Self-publication is a perfectly respectable way to get yourself into print'