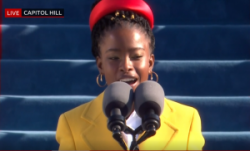 Amanda Gorman, who became the youngest poet at 23 to read at a presidential inauguration in January this year, recently hit no 1 on USA Today’s bestselling books list with her Washington poem ‘The Hill We Climb’ – the first book of poetry to reach the top spot since the list began in 1993.

The Harvard graduate and National Youth Poet Laureate, who is also the first poet to write and perform an original poem for the Super Bowl, said she was “humbled and honoured” by the news.

In January, Penguin Random House announced that because of the "overwhelming demand" and presales, ‘The Hill We Climb,’ with a foreword from Oprah Winfrey, would have a first printing of 1 million copies, which quickly turned into 1.5 million. Her debut picture book, ‘Change Sings: A Children's Anthem,’ and ‘The Hill We Climb and Other Poems,’ due to be published later this year, will each also receive a first printing of 1 million.

Find your poetic voice! Sign up for our first poetry workshop with Saili Katebe ►