Marvin Thompson wins National Poetry Competition with 'The Fruit of the Spirit is Love (Galations 5:22)' 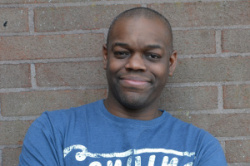 Marvin Thompson has won the Poetry Society’s £5,000 National Poetry Competition, for his poem ‘The Fruit of the Spirit is Love (Galatians 5:22)’. The poem alludes to Dante, the Bible, football, music, film and TV, spans decades, and features multiple lives and histories, some literary and historical, some personal, packed into its 19 lines. Judges Neil Astley, Jonathan Edwards and Karen McCarthy Woolf selected the winning poem from 18,113 poems entered into the competition from 7,472 poets in 95 countries. Karen McCarthy Woolf said: “What distinguishes ‘The Fruit of the Spirit is Love’ is how it operates on multiple, complex levels yet speaks in a voice that is fresh, honest and brave.

“Specific in its geography, natural in diction, this is a poem that asks many distinctly contemporary questions that make you feel as if it could only have been written here and now, in 21st century post-Brexit Britain. What is it to raise dual-heritage children in the UK, and specifically in Wales? How does black identity shape itself in a white environment, where allegiance to a predominantly hostile flag is the paradox of belonging?

“These are big questions, which, one might argue, only the best poetry is fit to answer. That Thompson does so with such concision and formal dexterity is a delight – the variation on the villanelle being the perfect choice for such existential enquiry. In addition, the poem’s Biblical intertextuality provides a historical and spiritual context that situates it as a work in conversation with the Caribbean and diaspora. That it includes the word cwtch can only be a bonus.”

Marvin Thompson’s debut poetry collection, Road Trip, was a Poetry Book Society Recommendation and selected as one of its five Black Lives Matter Inspiration books. It was also one of 40 collections the Forward Arts Foundation recommended for National Poetry Day. Road Trip was also chosen by the Daily Telegraph as one of the Poetry Books of the Year for 2020, and described by the Guardian as an “invigorating journey through complexities of black British family life.”

Marvin Thompson said that when he received a call confirming his win, “I screamed. My dual- heritage children stared at me, wondering what was going on.”

He added: “As with all my poems, ‘The Fruit of the Spirit is Love’ was written for my children. Like all my poems, it is a gift to their future selves. A poem to be read on nights when the weight of being a dual-heritage person in Britain feels too heavy to bear.

“My poem is for my parents. When they were born in Jamaica, they were British by way of Empire. When they made their home in London, they encountered racism. And friendship. And love. My poem is for anyone who has felt discrimination pressing on their ribs, air being squeezed out of their lungs.  My poem is for everyone, everywhere who lives their life seeking and believing in love.

“My home and my children’s home is Wales. As such, it feels vital that I add my voice to Wales’s rich literary culture. This is a culture in which, increasingly, diversity and difference are celebrated. In these challenging times, it is my hope that my poem inspires others to make poetry part of their everyday lives.”

The Fruit of the Spirit is Love (Galatians 5:22)

and a moustache – its ends curled with wax. Jason Lee?

I stood below his dreadlocks in woodland

and reached up to touch his feet. A whirring fan

I’d dreamt both Dali’s Christ and someone hanged.

and a comedian blacked up as Jason Lee,

“Please keep this from my kids.” Should I tell mine

I filled my lungs with ’90s minstrelsy

and sang, a teen lost in lads’ mag England?

Who taught me pro-Black talk was contraband?

The me who cwtched Dad whilst watching Spike Lees

was shoved down basement stairs, feet tied to hands.

Embarrassed, should I play my kids Wu-Tang

and other rap that set my rebel free?

One day, when they walk their kids through woodland

will they sing calypsos or ‘Blood of the Lamb’?

Nine other winners were also named in the National Poetry Competition, including Iain Twiddy for his poem ‘Fence’ (second prize, £2,000), Jack Nicholls for ‘Mum with Sword’ (third prize, £1,000) and seven commended poets (£200 each): Marie Baléo for ‘Peregrines’; Vanessa Lampert for ‘Sand’; Mark Pajak for ‘Trick’; Luke Allan for ‘Something to Show For It’; Daniel Bennett for ‘Clickbait’; Jennifer Hyde for ‘Lifesaving’; and Susannah Hart for ‘Song of my auntie’. Susannah Hart (last year’s first prize winner) and Mark Pajak succeeded in reaching the prizes for the second consecutive year. You can read the 10 winning poems here.

In a separate announcement, Maria Isakova-Bennett was chosen by poet and editor Vona Groarke as the winner of the Peggy Poole award. Maria will receive mentoring from Vona as her prize, culminating in a reading in the north-west in 2022. The award is a talent development scheme for poets based in the north-west of England.

Maria Isakova-Bennett lives in Liverpool, and works as a tutor for charities across Merseyside. She is writer-in-residence for Mersey Care and NHS Trust, and was poet and artist-in-residence at the Poetry in Aldeburgh festival in 2018. She is the author of three poetry pamphlets and creates and edits the hand-stitched poetry journal, Coast to Coast to Coast.

The award was founded in memory of the poet and broadcaster Peggy Poole. Previous winners of the award are Yvonne Reddick (2017), mentored by Deryn Rees-Jones; Mark Pajak (2018), mentored by Michael Symmons Roberts; and Saiqa Khushnood (2019), mentored by Malika Booker.