Lear was here: celebrating 150th anniversary of 'The Owl and the Pussy-Cat' 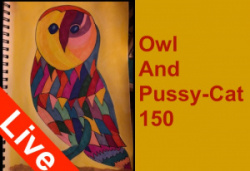 Grab your runcible spoon, set sail with the Jumblies and learn how to make an amblongus pie with Britain’s beloved master of nonsense humour. Embarking on April Fool’s Day, the community of St Leonards on Sea and its visitors in East Sussex are marking the 150th anniversary of a book of poetry, prose and illustration that included the first publication of a favourite children’s poem, ‘The Owl and the Pussy-Cat’.

Edward Lear is world-famous for his nonsense poems, limericks, paintings and, during his lifetime, was one of Britain's best-known travel writers. Less well known is his long association with Hastings and St Leonards on Sea. In 1852 he lived at a farm near Hastings for three months with the Pre-Raphaelite artist Holman Hunt who taught him to paint in oils up on the cliffs. The following year, when he sold his first major oil painting for £250, he was staying with Hasting's MP Frederick North, and was so happy that he said he wanted to "hop on one leg all the way to Hastings”.

In 1867 he wrote ‘The Owl and the Pussycat’ for Frederick North's granddaughter, Janet, who was ill at the time. Since the poem was first published in the 1871 edition of Nonsense Songs, Stories, Botany and Alphabets it has become his best-loved work, and was voted Britain's favourite children's poem in 2014.

◄ 'Self-publication? It’s a perfectly respectable way to get your book into print'