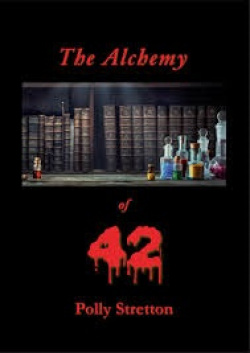 Polly Stretton is chair of the Open University Poetry Society, one of the Croome Poets linked with a National Trust mansion and park in Worcestershire, and has worked with children in schools. Her first poetry collection, Girl’s Got Rhythm was published by Black Pear Press, for whom she has collated four poetry anthologies about the first world war.

The Alchemy of 42 is a reference to 42Worcester, an alternative genre spoken word event in Worcestershire. 42 takes its name from Douglas Adams’s great answer to Life, the Universe and Everything. The focus is on gothic, horror, sci-fi and fantasy writing, although many stories and poems also encompass the darker side of life. The current collection of, not surprisingly, 42 poems is representative of the poems Stretton has written over the past nine years in response to 42Worcester prompts.

When Horace Walpole applied the word ‘Gothic’ to his novel ‘The Castle of Otranto’ in 1764, he set in motion a genre that has been in existence ever since. In Stretton’s opening poem ‘Haunting’ the word ‘Transylvanian’ is the first adjective off the block. Forest glades, a castle, an intruder in a cape and a murder quickly follow suit. We are in gothic territory. In this section, Stretton writes convincingly about childhood fears of silhouettes, Ruysch’s museum of curiosities whose contents are not for the faint-hearted, a poem which takes as its starting point a story by Joseph Sheridan Le Fanu, and a moth that escapes from the mouth of a bat.

In the horror category, ‘Rising Slowly’ begins with a graphic scene that could be straight out of one of Roald Dahl’s darkest stories for adults:

each yellow ochre-coloured cell emits a foul and fetid smell

Descriptions of blood abound in ‘He Drinks Blood’. Stretton doesn’t keep us waiting around too long before introducing us to the vampire:

it is mine he seeks now.

Other beings such as werewolves and shapeshifters make their appearance in ‘He Calls’ where wolf-women, we are told, “acquire / a dreadful desire for human flesh”. In ‘The Young Wives’ Tale’ Stretton writes about deception and misdeeds just as forcefully as Chaucer did in some of his Canterbury Tales.

In the sci-fi section Stretton explores the world of graffiti, tracing its history from cave art to street art. To some they are merely vandals' sprayings, scratchings, but to others they are “the oldest way to make a statement, / some may shout ‘defacement’ / but it’s a method, / an often needed taunt.”

Now that Nasa’s Mars Perseverance Rover has safely landed on the Red Planet and is beginning to send us back pictures of its surface, ‘Mars Curiosity Zoom’ is very much a poem of our time. Fired by Curiosity (The name of the rover sent to Mars in a previous mission in 2011-12), “They look at the rim of Gale Crater, / the Martian landscape they’ll view later, / hotter than anticipated, / warmer than evaluated.” This is where fiction becomes reality.

In the fantasy section two poems part-echo the title of the collection: ‘The Art of Alchemy’, which is punctuated with references to Greek gods and goddesses, and ‘42’ which brings us back to Douglas Adams. The latter is short enough to quote in full:

Deep Thought’s a computer, a super-computer

and has been working on the answer,

the answer to everything,

the answer to ‘the Ultimate Question of Life,

the Universe and Everything’,

it’s been playing on the CPU

for seven and a half million years

no one knows what the question is.

These poems may keep you awake at night because once you become addicted to them, you will want to read them again and again.

◄ A huge thank-you to everyone that supported our fundraising appeal - you did us proud!

Deadline day for £1,000 RSPB and Rialto nature and place competition ►