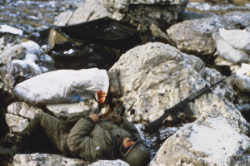 I looked in the dead mans eye

There were maggots crawling.

Soon flies would be flying

The smell of death scoured my brain

All I could think was “what pain”.

His lips drawn back in that dead mans smile

I wanted to run maybe a thousand miles.

But rooted I stared on confounded.

He was the dead man such a dead man.

I pondered and wandered how long.

How long had he lain in this lonely crag.

How was he missed went unfound

lonely laid in this empty ground.

Who’d killed him with what.

Was it bullets or blast?

To this lost lonely place cast.

Was he alone laid bare and scared?

Blood from the ears and nose.

So blast then ended him.

A lonely place to lie

no holiness here to die.

I joined the lads and told them.

We’d report it when we got back.

I thought of his mother

crying over a letter with a priest at her side.

I wander sometimes of him there

Is he still there skin taught in the frigid air?

Or bones bleached white in loneliness

With pieces of cloth blowing in the wind.

I Dance With The Ghosts. Falklands 1982 Eight ►