The inevitable happening in the lake district 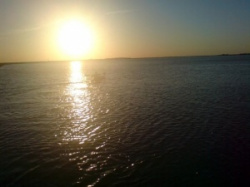 There is a lead character in J D Salinger’s novel Franny and Zooey who finds the shallow materialism of modern life 'soul destroying'; its ordinariness and greed 'demoralising'; and its university lecturer’s 'mediocre' and 'arrogant'. No - I’m not Franny - but this character’s sentiment echoes much of mine and I’m sure from time-to-time - we can all relate to Franny.

Not only was I becoming increasingly disillusioned with modern life - the eyes of modern society were becoming increasingly disillusioned with me - and then some. What I needed was the Franny Glass equivalent of the astringent, astute intervention of her brother Zooey Glass who brings Franny to a more balanced appreciation of the world and an understanding of the need to strive for artistic perfection, no matter what the circumstances.

Step forward the linguistically demanding ‘The Imploding Acoustic Music Festival’ an inaugural event that has recently taken place within the usual tranquillity and peace of a lakeside wood known locally as Fell Foot Wood - or, much more colloquially, as Those Fookin’ Midges.

‘Fell Foot’ was the adopted brainchild of both Wigan’s Baz Wilkinson and his clump of side-kick beard, who between themselves conceived what is, retrospectively, the simple notion of holding Wigan’s popular Imploding Acoustic Music Night not cooped up indoors - but alfresco. Add to that mix a small blend of deluded poets, warm weather, fantastic natural backdrops and a collective of artistically minded individuals - and here you found the perfect mix for what has already been coined the ‘Goldilocks Effect’ - a mixture so perfect and so right it’s difficult to imagine why nobody had ever thought about it before? Perhaps they had - but the logistics of arranging and promoting such a gig could not have been easy and may have been a deciding factor in lesser men and women not attempting such a fete - but Baz’s tenacity and ethos for promoting pure, wholesome music fuelled the levels of enthusiasm required to propel such an eclectic driven rocket off the ground. The attention to detail was second to none - Baz even provided the event with swathes of authentic, ravenous midges who buzzed about in balls of punctuation sized dots much to the annoyance of the city slicking campers who were foolish enough not to paint themselves in lavender oils or some other scented bouquet that midges find inexplicably repugnant. This bombardment of the Highland Midge or to give it its more fanciful Latinate name - the Culicoides Impunctatus was almost as distracting as the poetry which found itself sandwiched between the self proclaimed deities of musicians and their laser-beamed light shows. And it WAS brilliant.

Over the two nights we were treated to two different vibes. Friday, not surprisingly, was loosely fastened at the seams with flaying ribbons of disorganisation (or was that Saturday?) and nobody cared. Except maybe Baz - who did his utmost to make sure that the event went off with only the minimum amount of traumas pencilled into his book of contingency - like running out of organic Cider.
All the musicians from headlining acts such as Denis Jones and Sophie’s Pigeons to the stocking fillers - ‘I’m only here for the beer’ poets - all contributed to the weekend evolving into a truly amazing experience. The ambience? The vibe? Whatever is now the fashionable way of describing a truly relaxing, soul touching experience? That’s just what it was. The weather helped, of course. Sitting on the side of hill getting nibbled by fancy named midges in the piss rain doesn’t quite have the same effect upon one’s soul - although I’m sure that there are those amongst us who would still find this as equally soul touching - but it was the changing hues of the night sky and its sunsets that played their part. Like looking through a kaleidoscope of transparent clichés - listening to great music and conversations, staring at those huge clear skies and doing nothing more physiologically demanding than breathing or wiping beer froth from your chins. Nirvana on the side of a hill. Even the midges eventually settled down and joined in the fun. Little bastards.

So, if the character Franny Glass had attended at The IAI Music festival, chaperoned by her artistically demanding brother, I cannot help but think that each of them would have gone away satisfied and already persuading their creator Salinger to write in a leather-bound journal for next year - Imploding Acoustic Music Festival - Fell Foot Wood - DON’T MISS!