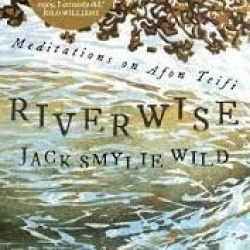 Born in Aberystwyth but mostly raised on the edge of Dartmoor, poet, nature writer and award-winning baker Jack Smylie Wild has been moving between England and Wales for the last 30 years. In 2011 he won the Write It, Make it Happen award which financed an expedition to the remote cloud forests of Nicaragua. After studying philosophy at Cardiff University he settled in Llandysul where he began to explore the length and breadth of Afon Teifi, the subject of this book. He now resides in Cardigan with his wife and two children, close to the river he loves.

Inspired by other writers, Jack Smylie Wild quotes extracts from poems by Seamus Heaney, Nan Shepherd, Edward Thomas and William Wordsworth, as well as including some of his own in this work of prose and poetry which captures the landscape around his favourite river.

Early on in the book, the author sets out what he hopes to accomplish: “This, then, would be my mission – to touch the Teifi with my hands at every season, to listen to the sounds that are made upon her; to imagine her countless creatures, her infinite tremblings in the wind, her myriad appearances and apparitions.”  Almost half way through the book, he asks himself the question “What is a river?” His answer is that “the river is other than the sum of its parts; a complex multi-layered pattern of processes we perceive as a whole. And beyond language, it is this moment, beneath me, before and behind me, flowing on, sustaining life.” Part of the paradox of water, which he writes about so clearly is that, deep down, it is in a continuous state of flux, even though to us its surface seems to assume the shape of a constant body of water, something that has always been there in the landscape.

Tracking down its source, the author neatly encapsulates the contrast between its wildest secret places and the noise and bustle of urban life through the simple act of tearing up sheets of newspaper to make a small fire. There is satisfaction to be had feeding headlines and advertisements into flames and watching them burn to a cinder. Somehow all the distractions of the world at large are dissipated so that all that remains is the stillness when he can watch “the coming and going and shifting of the light, the gentle glide of the clouds; the twig of ash which spins like the needle of a compass; the mysterious tangle and chaos of currents in a river which hardly seems to change”.

The measure of the river’s span is symbolically crystallised early on when the author places a piece of quartz from the mouth of the Teifi on a ledge by a tiny waterfall at its source. This acts as a link that draws together a length of some 73 miles.

Offering up an explanation as to why he persists in exploring its length and its tributaries, the author says that it’s “the promise of a find … that keeps the walker, the writer, the seeker, all moving forward, alert, like a hunter.” The Teifi is a meandering river and there is always the excitement of wondering what lies beyond the next curve.

Meditations on landscape, nature and river water are at the core of this book. Meetings with local anglers and coracle fishermen, sightings of otters, nights spent by the riverbank and reflections upon abandoned buildings whose ruins are slowly being reclaimed by nature all add to the magic.

One of the many strengths of this writer is that his focus is very visual with lots of memorable sentences for the reader to reflect upon. In ‘April: Gillo-Fach’ he writes about “Crowds of cuckooflowers quivering in crops of lush grass, hovering in constellations on their tall stems,” and in ‘Tributary: Hirwaun’ he mentions bales of hay “that lie like pieces of sliced baguette, drying out in the vast fields under the August sky” – an apt choice of imagery, given that he is a baker.

The unruliness and complexity of nature is touched upon at several points in the book. In one instance, the narrative gleaned from a map is contrasted with the reality of what is actually on the ground and in another, lists of plants with their subtle variations and sub-species remind us that “classification isn’t so simple: things cross-breed, hybrids occur, boundaries between species blur.”

This is a most enjoyable book. Aided by Ian Phillips’ sensitive illustrations, Jack Smylie Wild takes us on a journey of self-discovery as well as a journey to some of the Teifi’s most secluded and beautiful places. In his own words, “there is no experience more enlivening than simply immersing oneself quietly in nature”. Fully recommended.