'Write Out Loud was life-changing for me': Tony Walsh on how he became a poet

Leading performance poet Tony Walsh paid a heartfelt tribute to Write Out Loud at our fundraising Facebook event on Thursday night. Tony, who touched a global nerve with his poem ‘This is the Place’ at the vigil for those killed in the Manchester Arena bombing in 2017, said he went “way back” with Write Out Loud, to the days “when I first shuffled on to the Manchester, north-west scene with my hastily scribbled poems”.

In an inspirational pre-recorded video message for our fundraiser that touched and cheered and boosted the morale of all those involved with Write Out Loud, Tony said: “Tonight means a lot to me … I was 39 when I first read my poems in public … some of my first nights were with Write Out Loud … It’s great to have the band back together, as we say.” He went on to say that “what Write Out Loud does, and [other] arts organisations, it isn’t only life-changing, life-enhancing, it’s life-saving sometimes”.

He went on to explain what he meant by reading some passages from his ‘manifesto’ introduction to his poetry collection Sex & Love & Rock&Roll. It begins by referring to the days of 2003 and 2004, “when I wrote my first poems since my teens”. He was not interested in “avant-garde or avant meaning, avant-engagement, avant-got-a-clue-wot-you’re-on-about-mate, stuff. But poetry that hopefully might get a hearing in the streets and pubs of my home town … often tightly rhymed and musically metred … Poems for the milkman to whistle; to make him laugh and cry when he caught the words … Put simply I’d found what I wanted to do with the rest of my life.”

Tony paid tribute to Write Out Loud’s founder, Julian Jordon, pictured, watching and hearing it all in his attic on Zoom: “Thank you, well done, mate.” And he finished his memorable and uplifting set with an emotional, visionary poem called ‘Your Majesty’ which is nothing less than a hymn to every single person’s potential.

And that’s what Write Out Loud truly believes in, too. As Julian said, in a few unprepared words on Thursday night, relating how he first came to be involved in grassroots poetry, in Bolton, and realised how many people, including himself, "wrote in secret". He saw how you "just need to give people a venue, and a round of applause".

Write Out Loud started around the same time as Tony, beginning with just a list of local gigs in the Bolton area, and expanding over the years to become an online poetry hub, combining a comprehensive national gig guide, organising local open-mic nights in a number of towns, poetry news and reviews, a directory of poetry links, and very importantly, an online arena where any poet can establish their own profile and post their own poems, for others to comment on. A true poetry community, in fact.

During all that time it has been run by volunteers, who are still very willing to give their hearts and efforts to Write Out Loud. But we want to go further. Matt Abbott, pictured, compere of the fundraiser event and Write Out Loud’s new development manager, explained that money raised from our £10,000 Crowdfunder appeal – to be matched with an equal amount from One Community, based in Kirklees, West Yorkshire – would go towards more community-based online events, podcasts, online poetry workshops, and work in schools. Our successful Giant Poetry Party staged earlier this week was a heartwarming foretaste of that. 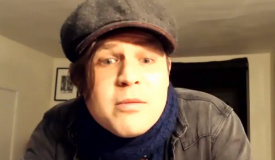 At Thursday’s fundraising event there were a number of other performances from leading poets such as Luke Wright, who described Write Out Loud as “a vital resource”. Luke adapted quickly to the pandemic as best he could, broadcasting nightly on Twitter for 100 consecutive nights. But he ended his Write Out Loud set on Thursday with a poem called ‘The Lay-Bys and By-Passes’, about those days of driving up and down the country to gigs, exhausting but exhilarating: “I miss England, travelling around it.” 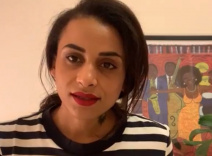 The Forward-shortlisted poet Rachel Long’s set included ‘Red Hoover’, a poem charting a relationship with a “ridiculously” good-looking Nigerian actor who nevertheless had certain drawbacks. Antonia Jade King, pictured below, co-host of London open-mic night Boomerang, began her set with a poem titled ‘Hand shaking isn’t always a sign of nerves’, and also included a poem about an actor, ‘Ira Aldridge Reads a Review of his Latest Performance’. For those that didn’t know – I certainly didn’t – Ira Aldridge was the first black actor to play many of Shakespeare’s leading roles.

An unexpected bonus on the bill was performance poet and ‘professor of whimsy’ Robert Garnham, pictured below, who hails from Paignton but thanks to the wonders of Zoom and his own attachment to the Surrey commuter town, is a popular regular at Write Out Loud Woking open-mic nights - and on Thursday night was equally popular with watchers on Facebook, judging from their comments.

The final poet was Louise Fazackerley, pictured below, an award-winning leading performer who, like Tony Walsh, first trod the boards at a Write Out Loud open-mic night. Louise has been a member of Write Out Loud’s board, and is poet-in-residence at Lily Lane primary school in Moston, Manchester, with which Write Out Loud has very strong links - such as staging the Giant Poetry Party, as previously mentioned.

As she said: “Write Out Loud was the place that I started to read my poetry, I had my shakey hands …some of the poems were ok, and some of the poems were terrible.” Louise read poems from her books Bird St and The Lolitas, and finished with one she has performed at “loads of Write Out Loud nights, on the importance of writing groups, ‘Writers Group at the Women’s Refuge’ – “I ask them to answer the question. / Why does the caged bird sing?”

A Write Out Loud fundraising night would be kind of meaningless without the inclusion of open-mic poets as well. We had six, including Isobel Clarke, a Write Out Loud regular and champion from the early days; Peter Taylor and Heather Moulson, from Write Out Loud Woking; Rod Whitworth, another Write Out Loud night veteran; Rachel Burns, and Lee Campbell. Thanks and well done to them all!

The final word should be from Julian, who said: “There aren’t as many people [working for Write Out Loud] as people think … they think we’re this big office somewhere, and we’re funded by the Arts Council … it just ain’t true!  We’ve done it on a shoestring all these years. It’s amazing.”

Amazing as it has been, those days can’t go on for ever. And that’s why we need your help, in safeguarding Write Out Loud’s future, and moving it up to another level.

You can donate to Write Out Loud’s Crowdfunder appeal here

You can watch Write Out Loud's fund-raising event here

◄ How to combat lockdown: poetry group's online magazine has readers in 20 countries

If I could be a bit sentimental for a moment … Thursday night reminded me of that scene in The Railway Children – no, not THAT scene – where proud, stubborn but heart of gold Bernard Cribbins from Oakworth station is reminded by the children on the occasion of his birthday of how much everyone in his village respects and indeed loves him. Forget ‘Daddy, my Daddy’ – the scene with Bernard is the one that makes me well up. There was a flavour of that on Thursday night. Tony’s warm and inspirational words – and all the messages of support we have received from other leading poets, as well as on the Crowdfunder – have reminded us that there is a place for Write Out Loud on the poetry scene, and will continue to be. We feel reinvigorated, and renewed. Onwards, and upwards!