Poems from the Borders: ed. by Amy Wack, Seren 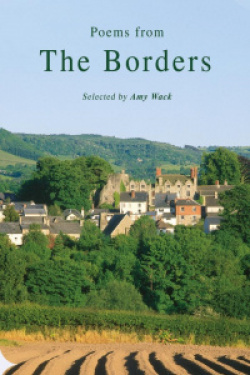 Poems from the Borders forms a part of Seren’s attractively produced pamphlet series celebrating the spirit of place in Wales. The other pamphlets in the series are titled Poems from Cardiff; Poems from Pembrokeshire and Poems from Snowdonia. The poems in all four pamphlets are selected by Amy Wack who was born in Florida and educated at San Diego and Columbia universities. She now lives in Cardiff and has been poetry editor at Seren since 1992.

The selection opens with ‘Borderland’ by Christopher Meredith. In it, readers are introduced to the word ffin which is Welsh for ‘border’. According to a note at the head of the poem it occurs inside diffiniad which means ‘definition’. In his opening stanza, Meredith writes:

You’ll find a ffin inside each definition.

edges are where meanings happen.

The theme is picked up again towards the end of the anthology in Richard Gwyn’s prose poem ‘Border Country’:

I sit in the woods above my sister’s house. The border passes through her land, an invisible boundary. How to define its nature? A border is an idea wedded to a geography. It implies a shift of consciousness, a change of order …

Several rivers flow through this selection, forming another type of boundary. John Powell Ward in ‘The Wye Below Bredwardine’ writes about the river’s “tonnage of sedately moving / water” and Claire Williamson in ‘Llancaut / Llan Cewydd’, described as “a pine cone’s throw from the border” keeps “one eye / on the truculent Severn, another on the equivocal Afon Gwy.” Catherine Fisher in ‘Severn Bore’ traces the progress of the tidal wave of surging water that forces its way upstream from the Bristol Channel. I used to think that this only happened once a year and was surprised to read that there are about 260 bores on the Severn each year, usually two a day on about 130 days a year, around the vernal and autumnal equinoxes (February to April and August to October).

Mountains can also be territorial markers. Here, one or two poems reference the Black Mountains which, in defiance of national borders, not only spread across parts of Powys and Monmouthshire but also extend across the England-Wales border into Herefordshire. Paul Groves may have had this in mind when he wrote the opening line for his poem ‘At Partrishow in the Black Mountains’:

The sun rises over England, and sets over Wales.

We look eastwards for each new dawn, westwards

One of my favourite poems in this selection is Ric Hool’s ‘Thigh-Deep in Snow & Thinking: Lee Harwood’ which was written during a walk in the Black Mountains some five years before Harwood’s death. Quite apart from the arresting title, its conversational style and the clever way Hool links the landscape he is walking through with Lee Harwood’s style of writing caught my imagination in a fresh and exciting manner. I like the way the final stanza lifts us for a moment out of the mountains and takes us down to Sussex, to what was Harwood’s own stamping ground:

But how is Brighton?

thud a snowball off your shoulder

just to see you turn

This fine selection of 28 poems by 27 poets will be of interest to anyone who wants to explore the work of both established and new and emerging poets writing in Wales today.