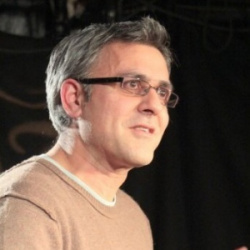 Award-winning poet Daljit Nagra has been appointed chair of the council of the Royal Society of Literature, it was announced today. The Bookseller quoted him as saying:  "Becoming chair of the RSL is the greatest professional honour of my life.

“I look forward to continuing our work in celebrating the diversity and wealth of classic and contemporary literature. As literature finds new readers and as authors from underrepresented backgrounds continue to find a voice, the work of the RSL has never been more important in safeguarding literature’s broadening contribution to our lives."

Daljit Nagra's debut collection, Look We Have Coming to Dover! won two Forward prizes, for best first collection, and best single poem. Its title alludes to Auden, DH Lawrence and Matthew Arnold. His parents are Sikh Punjabis who came to Britain from India in the late 1950s.

A number of poets have been made Fellows of the Royal Society of Literature, including Raymond Antrobus, Jane Draycott, Sasha Dugdale, Salena Godden, Andrew McMillan and Roger Robinson. In addition, the poet laureate Simon Armitage is among fellow poets Jackie Kay, Scotland’s makar, Blake Morrison, and Grace Nichols who have been appointed vice-presidents of the RSL.

The Royal Society of Literature has announced RSL 200, a five-year festival launched with a series of new initiatives and 60 appointments promoting and championing the diversity of UK writers. It comes as the charity celebrates its 200th anniversary.

Over the next two years, RSL Open will elect an unprecedented 60 new fellows from communities, backgrounds and experiences currently underrepresented in UK literary culture, including writers of colour, LGBTQ+ writers, writers from lower socio-economic backgrounds, writers who identify as having a disability and writers outside London, to ensure the diversity of the UK’s literary culture is reflected in its fellowship.

The RSL was founded in 1820, and is a charity for the advancement of literature.