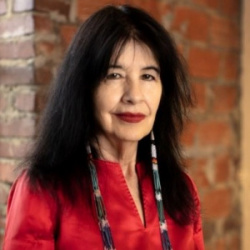 The first Native American poet to serve as America’s poet laureate, Joy Harjo, has been reappointed to a rare third term by the Library of Congress. Harjo, a member of the Muscogee (Creek) Nation, was initially appointed in 2019. She is the second poet laureate to serve three terms in a row since the current duties of the position were established 77 years ago. Robert Pinsky was the first.

Her new term officially begins in September next year. In a statement announcing the reappointment, Librarian of Congress Carla Hayden said that, amid the coronavirus pandemic, Harjo “has shown how poetry can help steady us and nurture us”.

Harjo, who lives in Tulsa Oklahoma, has completed her Living Nations, Living Words project, which was launched on Thursday, 19 November during Native American Heritage Month. The online map collects biographies and recordings from dozens of contemporary Native poets across the country.

Harjo said that she wanted to map the poets and their work to “counter damaging false assumptions — that indigenous peoples of our country are often invisible or are not seen as human. You will not find us fairly represented, if at all, in the cultural storytelling of America, and nearly non- existent in the American book of poetry.”

The Poetry Foundation describes Joy Harjo as drawing on “First Nation storytelling and histories, as well as feminist and social justice poetic traditions”. She “frequently incorporates indigenous myths, symbols, and values into her writing”. Her work is often autobiographical, informed by the natural world, and preoccupied with survival and the limitations of language.

◄ Write Out Loud's Gig Guide is back - for online poetry events

Celebrate with a brew! Film of poem by Julian Jordon on theme of refugees and cuppas wins TV award ►