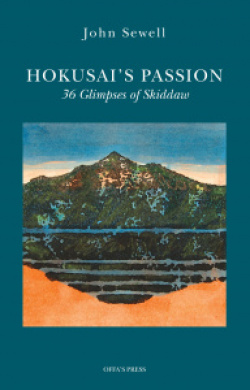 For me, poetry becomes much more interesting when it is multi-layered, comprising a coalescence of two or more seemingly different yet related subjects in which both poet and reader are left to make their own connections. Opportunities for invention are numerous and there is plenty of scope to discover associations which knit together different strands of thought. Such associations bring resonance and depth as well as new light on to the proceedings. This collection of 36 poems delivers on all these fronts. The subjects that coalesce are Japan and the Lake District; painting and poetry; Hokusai and Sewell.

Born in South Yorkshire and educated in Scotland, John Sewell now lives in Shropshire and is a member of Border Poets. He is the author of two previous collections, The Imbolc Bride (Littlewood Arc) and Bursting the Clouds (Cape).

Sewell describes his poems as “glimpses”. In other words they offer momentary or partial views rather than the full picture.  Short glimpses are present in poems such as ‘Between The Bungalows on Grisedale Close, December, 3 p.m.’ and ‘Through the Bathroom Window’. In the latter, Sewell gives us one of these glimpses in the form of a Japanese haiku:

as I wash my face.

Each poem is seen through a series of different lenses. The optical imagery is deliberate for we are meant to see these poems just as much as we are meant to read them. Sewell paints pictures in words - sometimes these are the briefest of brushstrokes and on other occasions they occupy a full canvas. They are so visual that they invite us to inhabit their landscapes and breathe their air.

They are also very physical. The strong syllables of the opening lines in ‘Through The Opened Curtains of Fieldhouse’ leave us in no doubt about what is to come:

The world’s got its foot down, back to business.

The tup, as it hurtles west

tries to balance on the flat-bed of the pick-up.

This is matched with the fragility of the stanza that follows setting up the gulf that lies between the Lake District and Japan while at the same time drawing them together through the effective use of contrast:

Meanwhile, with one deft touch, Hokusai

onto 35 supporting others. Voilà -

the mighty mountain, dais of rain,

lair of the shining ones, skitter,

Even in this stanza, a contrast is made between the solidity of the mountain and the fragility of Hokusai’s cards which have the potential to collapse like the proverbial pack at any moment.

Sewell’s poems reference a wide range of subjects: he borrows from Wainwright’s descriptions of Skiddaw, touches on the teachings of Bashō and Heisenberg, contemplates the sculpted head of Thomas Jefferson on Mount Rushmore, locates one poem in the setting of the Lodore Swiss Hotel, constructs a poem from a line by Dante, quotes from ‘The Keswick Reminder’ and draws inspiration from melodious stone instruments called lithophones.

By not giving everything away on a first reading, there are always new things to discover on subsequent readings. In ‘The Wrapped Mountain: Gold’ Sewell writes as much about his craft as he does about the mountain:

It’s that whole thing of revelation

making a gift of everyday …

Engaging, philosophical and original, the poems in this collection are “heightened to the power of ten” so that “when the wraps come off /…the mountain stands renewed / more like itself than ever.” Highly recommended.

Our document of an uncertain, unsettling, painful, frightening, uplifting time ►