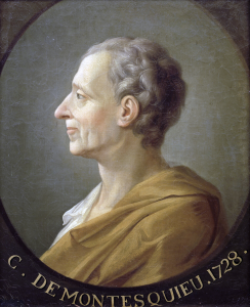 at his desk he sits, charting norms through a sea

of print. As reason discovers the laws

that define the natural good, history

is a realm he surveys, its changing customs,

till day lies buried in a stack of tomes.

And all around his own domain prospers.

grow fat in that calm his method infers.

With goodwill, too, the just state could happen,

though law was its necessary logic

underpinning both virtue and rhetoric.

Mild-mannered, generous, what charmed the minds

of a dozen cities were unassuming habits,

the lens of an understanding that blinds

with moderation: if the way man fits

each circumstance depends upon chance alone,

then only justice could be a touchstone.

And yet procedure bored him, its penalties

and precedents inflating the swagger

of counsels inching toward their victories.

In the panelled hush of an ancient chamber

they talk of broken fences: a ceaseless drone

of venal minds locked in litigation.

In the salons they read a luminous prose,

and savour his irony, each stricture

Beneath chandeliers their voices tinkle.

They are hairline flaws in priceless crystal.

With his books he sits, alone in the fort

of learning, and barters his sight for knowledge.

The Old Regime has crumpled. The retort

of the street will crush all measured language,

its philosophy honed down to technique,

the edge of a blade whose thinking is quick.