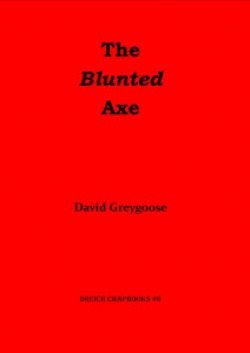 Followers of David Greygoose will know him from the medieval folk tales in his novel Brunt Boggart. As David Ward he has been the power behind the Liverpool Windows Project, supporting poetry in the city for several decades.  Previous publications are Jambo, On the Edge of Rain and Inside Pale Eyes. He co-edits the Windows Project magazine Smoke.

His poetry has shifted from the earlier cityscapes to the myth drenched countryside of his Northamptonshire childhood, drawing on ancient tropes of dusk and dawn, wood and stream, lost boys and abandoned girls in remote cottages or persecuted by superstitious villagers, cold bones and haunted dwellings.

She sat among the bluebells,

Lost in the chorus of birds

Singing sweeter through the trees

than any voice she had heard.

When they took her to work in the village

She smiled as if in a trance –

Until at the harvest supper

She led them in the dance

His twist on the tale of a lover drowning in desperation to reach his sweetheart gives us the voice of the girl:

The river is wide and flowing faster

And I won’t make the other side

Tell sweet Molly if you find her –

It is for her that I have died

He had no need to cross that river

He was a fool to take that risk.

The sky grew dark at our first meeting

One fleeting glance has led to this.

No love lost there. These are gothic tales and images redolent with grief:

In the house on the hill the voices still whisper.

A skein of sharp pain choked with dark pleasure.

Locked secrets spill out in the dead lantern’s flicker.

The voices beg questions which no-one will answer.

A winter’s moon, a forgotten room,

A tale that’s lost in its telling.

A midnight’s bloom, an empty womb,

a pillow stained with crimson.

The poems sit lightly on the page, seeming like wraiths in the mist. But they are sharper than they seem, pinned to the page by acute observations: the crow all feather and twigs and broken beak. Throughout there are birds: Dark hawks, dead crows, blackbirds, dunnocks, jackdaws, gulls, starlings.

Across the marsh flats where dark geese gather,

Around the edge of a sheen of still water …

His eye is strong, but wary, watchful.

He flicks his pale mane, looks away

Freda Davis's first poem was published in a Liverpool magazine alongside work by Roger McGough and Brian Patten. She has published two collections: Sympathetic Magic (1990), and Well Woman Poems (2003). She has also been an organiser for many years and member of Puzzle Poets at Sowerby Bridge.

◄ Resilience is the theme for Freedom From Torture poetry competition

'A man trying to extricate himself, afraid to open his eyes' ►