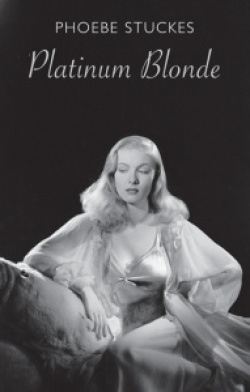 Phoebe Stuckes is an award-winning poet, four times winner of the Foyle Young Poets of the Year award, former Barbican Young Poet and Ledbury poetry festival’s young poet in residence in 2015. She also won an Eric Gregory award in 2019 and the Poetry Society’s Geoffrey Dearmer prize in 2019 with ‘Thus I became a heart-eater’, which is included in this collection.

She is a new voice in the poetry world and is compelling and original, challenging commonplaces and too-easy conclusions, and proposing instead disturbing visions of being human. The party girl is the protagonist of her debut collection; she has bleached hair and fake eyelashes so heavy they half shut her eyes. She traverses a reality of apparent fun and light-hearted entertainment that often ends in disillusion and violence.

The lyrical voice is strong; it explores the joys and pains of her condition and it is often complicit with the abusive situations she experiences, which are fuelled by alcohol and drug addictions. Love and loss co-exist in this view of a young woman’s endless search for affection and love that is never satisfied, leading her to a spiral of abusive relationships and affairs with ‘bad’ men and ‘lovely’ girls. She is complicit in the violence, though, asking her partners to hit her, and often self-harms in a circling drive that brings her back to her damaged self-conscious self, on the verge of insanity:

It takes a serious heft of my self control

not to run through the streets barefoot every day,

or walk into the ocean and let her take me.

This is how I want to die: in a boat, on fire

while Billie Holiday crawls out of a speaker.

I want everyone to be watching.

The death drive creeps up in a self-deprecating attitude that can be humourous at times and reflects societal judgment and the way her partners treat her. The party life escalates in a mixture of romantic insecurities, wild entertainment and overt challenges to ordinariness:

Once this breeze drops, I’ll be fine.

Give me two Paracetamol and a week,

I can’t face another doctor,

another cul-de-sac. I’m not going back

to my parents’. I can’t remember

what I used to be like or what I did yesterday.

I’m sorry I kept your book for so long

I’m sorry I met you and flirted,

but never phoned or

Nothing seems to work out in her life, which is lived at the edge; she pushes the boundaries further and further to where the sense of loss is overwhelming. She is engaged in a continuous quest for identity where the self needs to be shattered before being reconstructed. Women are associated with caged animals, dogs tied to a leash and treated as such:

Shall I work backwards?

The man who almost dissolved me

I locked myself in the bathroom.

There was a strange girl in the mirror,

I think I left her there.

those men who want women to act like dogs.

The past never stays where you put it.

Where did I get these green and yellow flowers at my wrists?

This handful of violets at my throat?

Why is my bottom lip swollen?

The abuse is unforgivable even though it happens in a reality where anything can happen and anything can be done to the vulnerable and weak. The possibility of being murdered looms in some poems and the victim haunts the victimiser in horror stories of sorts. However, the protagonist hopes to be loved one day or at least to be cared for, a perspective that seems to be improbable and illusionary:

I’m reading on the steps outside a chapel

in saving me and you say

with soil or strips of wallpaper

why would I ask for love when I could curl up

A mad chick is a blood stain on a white skirt.

She has no mother of her own but gave birth

to herself in a shell or a dustbin.

The final vision is bleak: dissolution and destruction pervade her world. The platinum blonde party girl is fragmented, cut into pieces by her lovers. This reflects an existential condition where the choice not to be committed and the refusal of banal ordinariness are a revolt against hypocrisies and fake myths or stereotypes. This attitude ends in self-destruction and nothingness. Stuckes’s poems cleverly explore and express the development of this condition; her deft verses consider it from different angles and in different situations that can sometimes be appalling but are always involving in their extreme vision.

'Going off like some lavish parade into the great overcrowded silence' ►