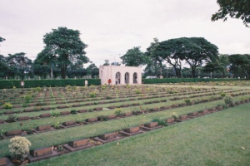 To: Private WE Freeman, Recovered

“Dearest son, After all this long time,

we are so excited, we hardly know

what to do. It seems so strange

to be able to write.”

So many letters, via War Office,

Red Cross. When she heard

he was safe she sent three in a week.

“Some camps seemed to have fared

better than others. I still tried

to think your luck would hold.”

“You were missing 15 months

before I heard you were in Jap hands.

that Taffy, as you used to call him,

they have made a mistake.

“We will make it up to you,

as far as it is in our powers.

Last year we had a bad hit,

but we were lucky. The house

was much damaged, but our furniture

was safe. Also your piano.”

“Do you know I am getting on now,

63 this birthday. Pop says it does not

seem true. I do so wonder how you will be

after all this time in the terrible heat.”

There was bunting down the street

when he returned. He hid indoors for days.

The hoary and the gory ►

Grateful thanks to you chaps for your comments. You're right, Paul, it is treasure when you find something like these letters. I'd never really known my grandmother as a child, and so when I read them, it was like hearing her voice for the first time. Phil, I tried writing a novel about all this, but didn't get very far. All I have is a handful of poems - so far - although one did get an honourable mention in a Wilfred Owen Association competition, something I'm proud of, on dad's behalf, and all those other prisoners, too. ('Learning by Heart' is the first of my sample poems on my Profile, if you care to look). Graham, my father once said that they talked about this in the camps, the privations, illnesses and sheer hunger that they suffered, and they reckoned it would take about five years off their life expectancy, for those who survived. My father suffered regular bouts of malaria for 10 years after he came back.

For years when I was very young I had a school friend who lived in the next street who was often seen out with his grandfather. I envied him as I had never known my own. It was only many years later, recalling the boy to my mother that she told me that the man was actually his father who had been incarcerated in a Japanese POW camp.

This brought that memory back in stark detail Greg. Powerful memories. Thank you

Brings the war years back in abundance - the horror of our captured troops - astonishing news lurking in our attics.

I bet it was weepy time all round during your visit.

Poignant this - as poignant as it can get.

Some things never heal - even for descendants on the home front.

Greg, you know you have a best seller waiting to be written don't you.

This must never be lost to our world, Greg.

This is truly a treasure beyond measure.

Thank you for sharing.
Paul.

Posted to mark the 75th anniversary of VJ Day today ... a found poem based on a cache of letters written by my grandmother to my father after she learned he was alive in 1945. She had had no word of him since 1942 and the fall of Singapore. I found these letters while clearing out my mother's flat in 2012. The picture is of the cemetery at Kanchanaburi in Thailand, of the graves of Allied prisoners who died while working on the 'death railway'. We visited it in 2008.