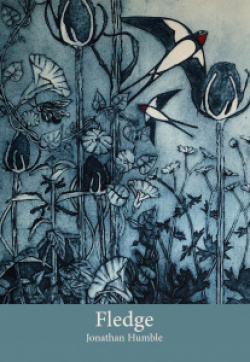 Jonathan Humble lives in Cumbria, and is an observant cheerleader for the natural world. This meticulously crafted collection is suffused with a love of nature, and of birds in particular. A number of the poems are laced with humour; but there are distinct moments of melancholy, and pain, too.

There are also several poems about childhood, a subject that might well interest a primary school deputy headteacher. ‘Fledge’, for example, returns to old haunts in Goole in east Yorkshire. Humble remembers games played close to Philip Larkin’s train route to London, “unaware of summer weddings and passing poets”. ‘One Called Paul’ recalls the children’s rhyme, with the poet worried about a young bird that appears reluctant to fly away, while in ‘Fireweed’, beneath the punning with the wildflower name – “he peed higher, spat further, swore louder” – the early death of a children’s gang leader is mourned.

Humble is by no means sentimental about the natural world. He admires the effect a hawk has on the local bird population “neighbourhood watch” in ‘Adrenaline Junkie’: “car alarm blackbirds … scaring little brown jobs witless”, and exults in the appearance of this “striped waist-coated bully”. In the last stanza he appears disappointed, as no doubt Ted Hughes (a far more brutal poet) would have been:

no satisfying explosion of feathers

at the end of a breakneck career

through the field by his hedgerow,

planted fifteen years ago in hope of encounters

looking for thrills and spills

Yet there is also the rueful humour of ‘Schrödinger’s Mouse’, which recounts the poet taking the time and trouble to humanely remove a mouse trapped among his raspberries, to woods a mile away:

Your love of my raspberries has resulted

in this late evening walk in headtorch,

to hedges of hazel and blackthorn,

far enough from home to foil ideas of return.

Aware of owls ripping through moonlight,

I knee in damp fescue and sedge,

mouse or no mouse? that is the question …

He sums up the dilemma of a lover of wildlife, and of raspberries, in the final stanza, with a reference to the tales of Lakeland’s Beatrix Potter: “But, unlike Mr. McGregor, as I stumble one mile / back through darkling woods, soft clart that I am, / I’m hoping the owls have an off day / and secretly, despite your fruit plundering, / I’d quite like to see you again.”

There is more trademark Humble humour in ‘Incoming’, once deservedly selected as a Write Out Loud Poem of the Week, as he takes cover from a hostile curlew:  “How were you to know, / my crescent-beaked nemesis, that I am, / in fact, a fully paid up member of the / RSPB”.

‘In Boots Like These’ we see a Wordsworthian transition from “roads and high rise” to “rock and root”, as the poet transports himself from “walls and traffic and business plans” to landscapes that cleanse the mind of “binding cares; locked-in despair … this mind made free to feel again. / I’ll live and breathe in boots like these.”

Two poems about trees  – ‘Little Rowan’ and ‘Caught in Concrete’ - reflect a tenderness for the young and vulnerable. He offers to relocate a sycamore “shooting from damaged concrete … free from a cemented aggregate / destined to limit lofty plans?”

‘Leveret’, after a poem by Carolyn Jess-Cooke, is achingly painful:

I walked on broken glass, endured the lightning

And carried you one last time in the autumn,

Until with curtains closed amid the silence,

I placed the hares and wee blue shoes in cotton.

Yet even in the depths of winter, Humble finds himself able to look forward, to the “welcome return of African visitors” in ‘Coming Home’, and in this poem, too:

Ahead are days when looking out of windows

will be rewarded with scenes of hectic flight,

the freshness of a clear cobalt canvas,

lifting the darkness of a season’s sadness

and easing the debt so I might breathe again.

The enchanting cover illustration is by printmaker Suzi Thompson, who is based in South Yorkshire. These are beautifully structured poems, with a warmth for the natural world that makes one think of John Clare. In his lyrical opening poem, 'Dandelion Sun', Jonathan Humble attempts to encapsulate a philosophy, a “trust in truth … that will not fail at dusk”.  A wise, and often wonderful collection.

Soooo happy with this lovely review from Write Out Loud on the publication of Fledge. Thank you Greg Freeman.