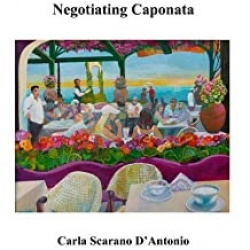 Carla Scarano D’Antonio grew up and studied in Rome, before moving to England and gaining an MA in creative writing at Lancaster University. She now lives in Surrey, contributing poetry and reviews to a number of online and print magazines.

I didn’t so much read these poems in Negotiating Caponata, her debut collection, as experience them, the precision and richness of the imagery making them a feast for the senses.

The steadying effect of the processes involved in the preparation of food – the chopping and peeling followed by the magical connecting and melting of ingredients as the meal cooks – never settles into cosiness. There is always something more – a sometimes disturbing reference to a relationship or to the power and mysteries of the seasons and the natural world. In ‘Cooking betrayal’, the food tells a compelling story: “I was the idiot, / my pointless cake making and biscuit making / crumbling along the path, signposting my coming back home”.

The bonds of family and the language that binds people together are themes that run through this collection. But these are not straightforward, predictable poems; in ‘Your illness’, where the poet describes the sudden onset of her father’s final illness, the last line refers to her mother “forgetting all the past beatings and the shame”, revealing that this had not been an easy marriage. ‘Flying’ conveys in just a few words the challenging nature of the relationship the poet had with her father, recognising the extent of his love for her “in spite of all the fights,/ your blows and my defiance”.

‘Cyclamens for my mother’ presents a vivid picture of a mother tending to the flowers on her balcony in Rome, but here again the last lines contain warning of imminent sadness: “The dead are calling you, / I’ll hold your hand walking the last steps of the journey. / The cyclamens shrink within the bulb/under soil till the new season comes.”

Several very moving poems refer to long journeys and the need to adjust and settle in an alien environment. I particularly enjoyed ‘Grandad Ciccio and Grandma Orsola’ with its restrained but powerful description of the couple “Sitting serene like ancient Roman statues … with their first baby daughter on their lap”. They have travelled “From the south straight to the northern border”, where “their smooth dialect clashed against guttural sounds”. The closeness of the couple is conveyed with deft understatement as in “His arm touches lightly her shoulders”.

In this poem, as in others, there is a reassuring sense of renewal and of life continuing beyond upheaval; Grandma Orsola has their baby on her lap. Even in the presence of death, the poet finds comfort in nature; in ‘Your last words’ she opens “the window to let in the mild April air” and recognises that her memory of her father lives on. There is sadness in the poem ‘Ants’ where everything is tried to avoid killing the invading ants, but in the end they have to die, “their insignificant bodies dissolving under our feet”. In this poem the circle of life is incomplete and I shared the poet’s sense of failure and regret.

I read these poems convinced that Carla Scarano D’Antonio not only loves the human race with all its quirks, weaknesses and occasional glories; she faces up to difficult issues without inflicting glib judgments on the reader. She recognises “the importance of imperfection”, a message beautifully conveyed in ‘In touch with my daughter in Tokyo’: “The impersonal networking / warms me up, though infertile / reminds me of the importance of imperfection / in our infernal autonomy.”

This is a wonderful collection. I thoroughly enjoyed the satisfying complexity of poems such as ‘Negotiating Caponata’, which is so much more than a recipe, and am haunted by the lingering beauty of words that most of us can only chase in dreams.

'The real me just fades away, glance by glance, day by day' ► 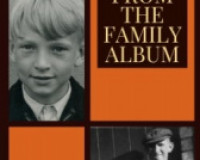